EnLink Midstream is wasting no time in building out its onshore portfolio, announcing Monday plans to build a 45-mile, 8-inch diameter condensate pipeline and six natural gas compression and condensate facilities to serve producers in the Utica Shale. 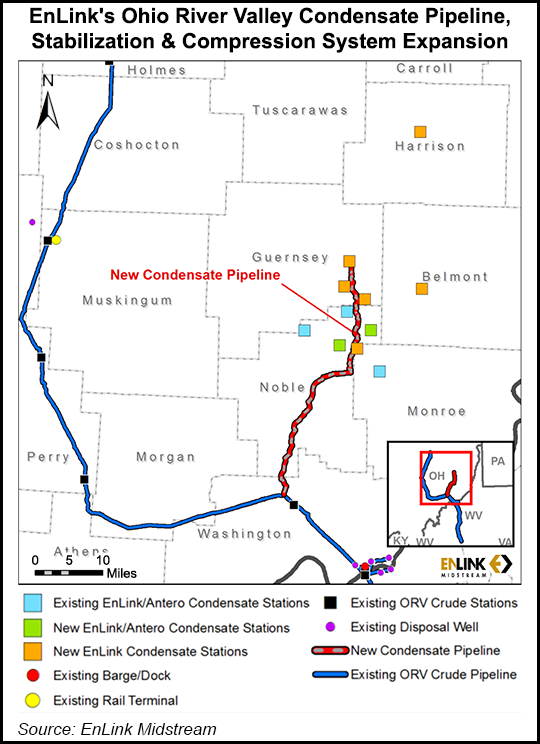 “This new expansion project is a major step forward for EnLink, as it enables us to build upon our existing asset platform and take advantage of the tremendous growth opportunities in the Utica Shale,” said CEO Barry E. Davis. “This project is a game changer for our Ohio River Valley business and positions us in the heart of the gas and condensate production fairway. By further enhancing our midstream capabilities, we will provide multiple take-away options for stabilized condensate via our pipeline system, rail terminal and barge facility.”

As part of the project, the Dallas partnership clinched a long-term, fee-based agreement with producer Eclipse Resources Corp. for compression and stabilization services, and for purchasing stabilized condensate. Eclipse currently is running four horizontal rigs in the Utica and expects to add two more by the end of the year (see Shale Daily, Aug. 14). EnLink previously agreed to build two stabilization facilities in the Utica for Antero Resources Corp., which has joint operating agreements with Eclipse.

The new condensate pipeline would connect to EnLink’s existing 200-mile pipeline in eastern Ohio and West Virginia, to the partnership’s Bells Run barge facility and Black Run rail terminal. The pipeline, set for completion in the second half of 2015, is to have initial capacity of 50,000 b/d, expandable based on customer interest. An open season is scheduled within the next few months.

To support the project, EnLink plans to expand existing midstream facilities in the region by adding more condensate storage capacity and handling capabilities at the Bells Run barge terminal on the Ohio River. About 120,000 bbl of above ground storage is to be added, which would bring total capacity to 360,000 bbl-plus.

After the expansions are completed, the partnership in the Utica would own/operate more than 250 miles of pipeline, 11 gas compression facilities with 1.2 Bcf/d of capacity, condensate stabilization facilities with 60,000 b/d, as well as a fleet of more than 110 trucks and eight brine disposal wells.

The new facilities add to EnLink’s growing portfolio after the Devon Energy Corp.-controlled business began business as a standalone this year. In early August two projects were launched with supporting contracts to expand operations in the Permian Basin and in South Louisiana (see Shale Daily, Aug. 6). EnLink’s total assets across the U.S. onshore now include 7,300 miles of gathering and transportation pipelines, 12 processing plants with 3.3 Bcf/d net processing capacity and six fractionators with 180,000 b/d net of capacity.