Eni SpA has raised the estimated oil in place for an offshore block in southern Mexico to 2 billion boe. 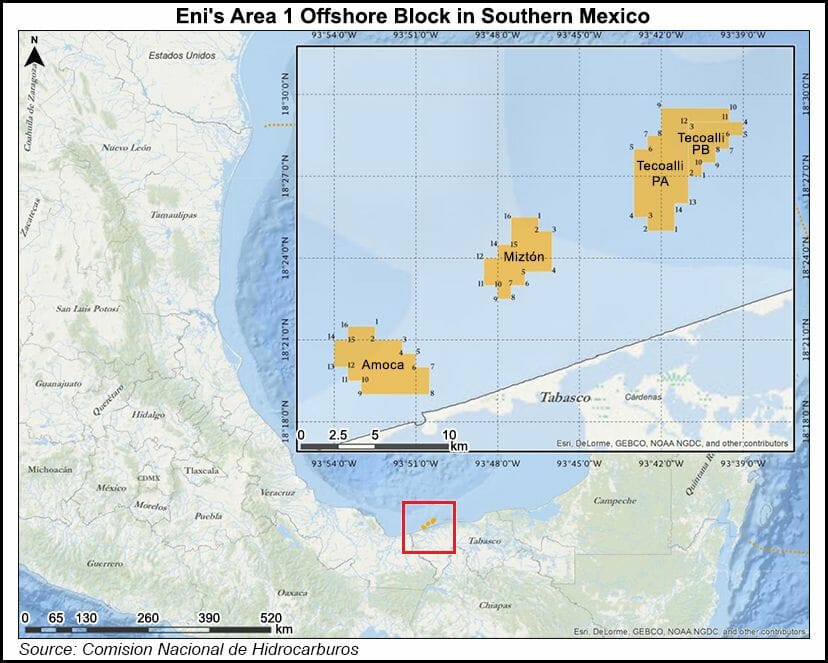 The Italy-based supermajor, one of the first foreign operators to enter Mexico since the 2013-2014 energy reforms, revised the estimate for Area 1 after completing its 2017 drilling campaign earlier this month, management said Tuesday.

The new reserve figures are based on the results of a recently drilled well in the block’s Tecoalli field and updated reservoir models for the nearby Amoca and Mizton fields.

The upgraded reserves estimate by Eni is its second this year. In July, the company raised the Area 1 estimate to 1.4 billion boe from 800 million boe, based on drilling results at a well in the Amoca field.

Eni plans to submit the plan of development (POD) shortly “for Area 1 to the approval of the local authorities,” the company said. “As soon as the POD is approved, Eni will sanction the development… with production startup planned in first half 2019.”

The block is estimated to hold 90% oil reserves and 10% associated natural gas, according to Eni. Company executives have said the results so far have exceeded their expectations.

Eni won the rights to explore Area 1 in 2015 in Round 1.2, the second Mexican licensing tender open to private and foreign operators. The tender offered blocks with previously discovered fields for companies to evaluate and develop.Apart from Eni, only two other bidders picked up blocks in Round 1.2.

For its 2017 campaign, Eni drilled four wells on the block — two in the Amoca field , one in Mizton and the recently completed Tecoalli well.

At the end of last month, the Mexican upstream regulator, the Comision Nacional de Hidrocarburos (CNH), approved Eni’s 2018 work program for Area 1, of which it is the sole operator.

The company has an authorized budget of $120 million for Area 1 next year and in February expects to begin drilling a third well in the Amoca field, according to a presentation at a CNH meeting last month. Amoca alone is estimated to hold 1 billion boe, with potential for further upside.

Eni also plans to carry out further production tests at the Mizton and Tecoalli wells, as well as a series of evaluation studies as it prepares to move the project into the development phase, according to CNH.

Earlier this year, the producer requested and was granted a one-year extension to its Area 1 evaluation phase and has until next November to submit a development plan.

Last month, CNH also approved the 2018 work programs for two offshore blocks operated by Houston-based Talos Energy LLC. One of those blocks, Area 7, contains the Zama discovery, announced in July, in the same week that Eni publicized the results of the Amoca well.

Zama is estimated to hold 1.4-2 billion bbls of light oil. Both of the Talos blocks, along with Eni’s Area 1, are located off the coast of Veracruz and Tabasco states in southern Mexico.

The 2018 work program for the Zama block is budgeted at $9.2 million, according to CNH. Talos aims to continue evaluating the discovery, updating its geological and geophysical models and developing a detailed proposal for its development plan.

Talos and its partners, Sierra Oil and Gas S de RL de CV and Premier Oil plc, won the rights to explore Area 7 and Area 2 in Round 1.1, Mexico’s first international licensing auction. No other bidders picked up blocks in that tender, which did not offer acreage with previously discovered fields, unlike the subsequent Round 1.2.

Talos has until September 2019 to submit evaluation plans for the two blocks.

The approved work program for Area 2 is similarly budgeted at $9.6 million. When submitting the program to CNH, Talos reported that it had identified prospects that were more attractive than its initial target of Pakal-1, previously scheduled for drilling in 2018.

The company has postponed the exploration well until 2019 and aims to use 2018 to continue reprocessing seismic data and then conduct shallow geohazard and geotechnical studies, in order to select a new drilling target.

Hokchi Energy, another of the winning bidders in the Round 1.2 shallow water auction, reported in October that it had wrapped up a drilling campaign on its block. The operator drilled five wells, conducting production tests at two. Hokchi said at the time that it was working on a development plan to submit to CNH for approval.