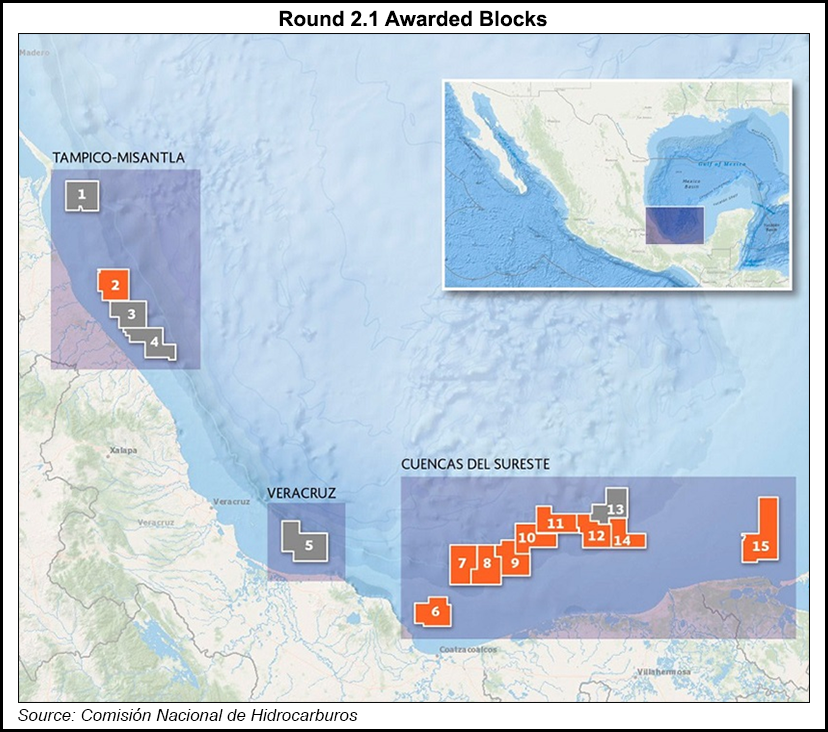 Under terms of the joint venture (JV) transactions recently announced, Eni would give Lukoil a 20% stake in the production sharing contracts (PSC) of Area 10 and 14, while Lukoil would give Eni a 40% stake in Area 12. The three blocks were awarded in Mexico’s Round 2.1 competitive bidding process in 2017.

“The objective of the deal, in light of the close proximity of the blocks, is to diversify the exploration risks, accessing wider opportunities and increasing mutual operational synergies, Eni said.

Pending approval by Mexico authorities, Eni would hold stakes in seven offshore blocks in Mexico. Exploration drilling is slated to begin as early as mid-2019.

In July, Mexico’s ComisiÃ³n Nacional de Hidrocarburos (CNH) approved Eni’s Area 1 development plan, which envisions a production plateau of 90,000 boe/d beginning in 2021, and estimated capital expenditures of $1.9 billion. Area 1 was awarded in 2015 in Round 1.2.

“The Block 2 trade…to me is a fascinating trade,” Duncan told analysts. “We’re in the last year of our primary term lease there. The block to the south is in the first year of its primary term lease, and we really have a nice mix of opportunities to go across both of those leases.”

Talos, along with its JV partners Sierra Oil & Gas and Premier Oil plc, won a PSC at Block 2 through Mexico’s Round 1.1 bidding process in September 2015. Block 31 was awarded to PAE through Round 3.1 in March 2018.

Talos and PAE are working on a rig tender to drill the first exploration well at Block 2 in 2Q2019, Duncan said.

At the Zama offshore discovery, meanwhile, Talos, Sierra, and Premier plan to spud the first appraisal well by the end of this month. Duncan said that Talos expects to spend $75-80 million net to its interest at Zama between now and the second quarter of 2019.

A final investment decision for Zama, which was discovered in 2017, is expected in late 2019 or early 2020, Duncan said. Zama is part of Block 7, which the consortium was awarded in Round 1.1.

Duncan also said that Talos, which this year completed its acquisition of Stone Energy Corp. and Whistler Energy II LLC, may pursue merger and acquisition (M&A) activity in Mexico as well.

“As a general matter, I think it’s a good time” to consider M&A, Duncan said. “Obviously we’ve done two transactions this year; we might want to do a little more in Mexico.”

After the acquisition of Stone was completed in May, the newly merged company began trading on the New York Stock Exchange under “TALO.”