EnerVest Ltd., the second biggest leaseholder in Ohio’s Utica Shale, plans to sell the majority of its property in several packages in hopes of fetching $6 billion or more. 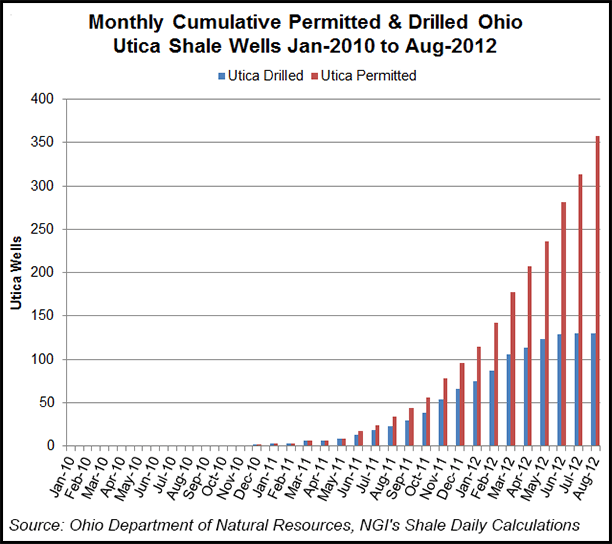 The privately held Houston producer, together with publicly traded arm EV Energy Partners, plans to sell 539,000 net acres in the Utica by the end of the year. According to NGI’s Shale Daily, EnerVest is the second biggest Utica Shale leaseholder after Chesapeake Energy Corp. (see Shale Daily, Aug. 16).

Selling the Utica acreage would free up proceeds for other oil and gas fields that require less capital and are less risky, executives said.

EnerVest recently agreed to buy a big leasehold in the Midland Basin, part of the mature Permian Basin, from Chesapeake, which has been a frequent partner in the Utica Shale (see Shale Daily, Sept. 13; Aug. 8).

EnerVest has hired Jefferies & Co. to sell the Utica leasehold in several packages. According to the company, executives have met with Asia Pacific companies to drum up interest; U.S.-based companies and financial firms have also expressed interest.

The drilling rights to 70% of EnerVest’s Utica acreage is to be sold. The company has completed four wells in the Utica and participated in nearly 60 wells with Chesapeake. The buyer would become Chesapeake’s partner in the wells in which EnerVest has interest. The company plans to keep around 231,000 net acres for future development.

EnerVest CEO John Walker, a former Wall Street energy analyst who founded the company, said in May the natural gas industry had been “backed into a corner” because the factors that had previously helped producers to profit no longer existed (see Shale Daily, May 17).

EnerVest, which began acquiring drilling rights to the Utica in 2003, has spent about $1.2 billion over the past 10 years in the northeastern part of Ohio to unlock oil and natural gas. The holding company raises funds from about 140 institutional investors and pension funds that include Liberty Mutual Insurance Co. and John Hancock Life Insurance Co., as well as universities that include the University of Pittsburgh and Emory University.

A total of 358 Utica Shale wells were permitted and 130 drilled in Ohio between January 2010 and the beginning of last month, according to Ohio Department of Natural Resources data.

EnerVest is 70% weighted to natural gas and today operates in 12 states across 4.1 million acres. Its 26,000 wells produce around 525 MMcfe/d. In addition to the Utica, EnerVest now operates in the Barnett and Bakken shales, the Appalachian Basin, the Permian Basin, the Midcontinent, the San Juan Basin, Central and East Texas, Michigan and the Monroe Field in Louisiana.

The Department of the Interior (DOI)’s Bureau of Ocean Energy Management (BOEM) on Friday issued a five-year proposed program (PP) for offshore oil and gas lease sales during 2023-2028, although Interior Secretary Deb Haaland noted this does not necessarily mean lease sales will occur. DOI is calling for a maximum of 11 lease sales for…