There was a time before the advent of Ohio’s Utica Shale boom when the Clinton Sandstone was king, reigning as the state’s most actively produced formation. But EnerVest Operating LLC is trying to breathe new life into the old play by reviving the stubborn rock with horizontal drilling. 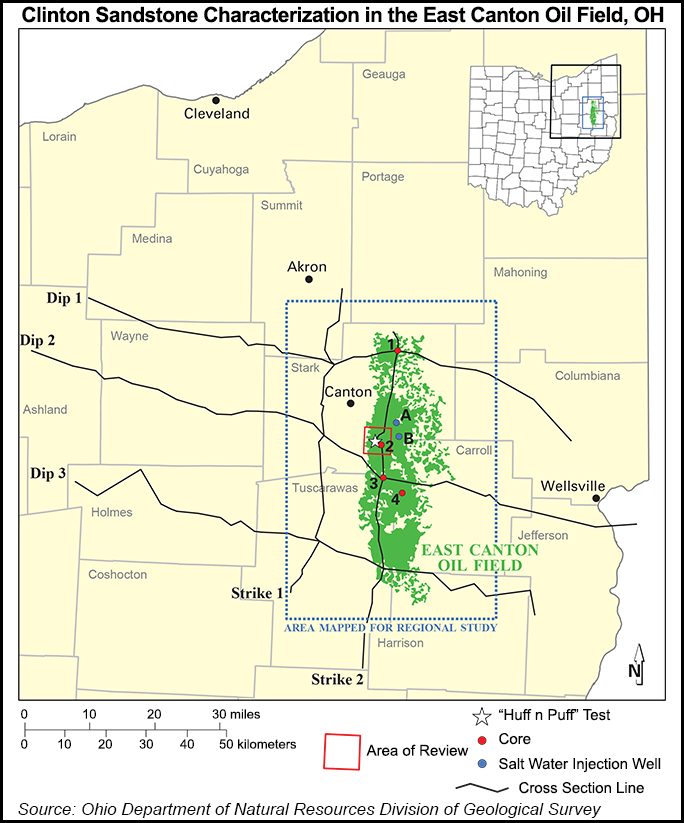 Located in the East Canton Oil Field, which stretches across roughly seven counties from Northeast Ohio southward, 1.5 billion bbl of oil is still thought to be in place in the Silurian-aged Clinton, according to a 2010 study by the Ohio Department of Natural Resources (ODNR) Division of Geological Survey. Barry Lay, general manager of EnerVest’s Appalachia north asset team, said 90% of the oil-in-place is thought to be there and recoverable.

There are 3,100 current or formerly producing wells in the East Canton field, which was discovered in 1947. As of 2010, the Clinton had produced 95 million bbl of oil, making it the overshadowed, but most significantly produced, oil field in the state. EnerVest has 115,000 gross acres in the field.

“The original oil-in-place is still there. By its nature, secondary recovery is not effective at large-scale,” Lay told a crowd of hundreds during a presentation on Thursday at the Ohio Oil and Gas Association’s (OOGA) annual winter meeting in Columbus. “So how do we increase recovery and tap into those massive amounts of oil? We believe the answer to that is horizontal drilling.”

Lay said the company, which through affiliate EV Energy Partners LP, also has been active in the Utica Shale, took ODNR’s study “to heart” and recently decided to drill a series of test wells in the Clinton. After three vertical tests, he added, it gave the company confidence to move forward with a horizontal well, which confirmed its belief that the play is a good candidate for horizontal drilling.

The Clinton is composed of interbedded sandstones, siltstones and shales. While the formation has been challenging to develop with horizontal techniques, eating “bits like a hot dog eating champion at Coney Island,” Lay said in his presentation, the rock has the sort of brittleness that is conducive to horizontal fracture stimulation. It has good porosity, but low permeability, meaning more exposure to the reservoir rock is needed to tap the oil in place.

“The Clinton is extremely hard, abrasive sandstone,” Lay said. “Our rate of penetration and bit-life management is critical to the success of drilling and operations in the Clinton. It’s not uncommon to [damage beyond repair] a bit. Low mud weight is important too because of the relatively underpressured formation that we’re dealing with.”

The company has drilled seven Clinton wells to date. It is currently producing 1,100 bbl/d from the Clinton. Results so far have shown reservoir pressures of about 1,500 psi.

“From our data, from what we have seen and what we expect, is at least a 10-fold increase [in production] by drilling horizontally over a vertical well,” Lay said. “I think we will see that increase as we continue to develop wells and continue to learn more about the reservoir and refine our drilling and stimulation techniques.”

So far, horizontal drilling in the Clinton has presented several challenges. The mature field, which has long been drilled on 40-acre spacing per state law, is dense with older producing wells, making it difficult for EnerVest to put together production units and forcing the company to weave its way around existing sites. The company has also had difficulty securing mineral rights for the lower-yield wells with landowners that are now accustomed to better terms for the Utica Shale.

The East Canton field encompasses Summit, Portage, Mahoning, Columbiana, Carroll, Tuscarawas and Stark counties. EnerVest has focused its Clinton efforts in Carroll, Stark and Tuscarawas counties near Utica development. Curves have been difficult to drill with bits going through limestones, shales and dolomites.

One major production challenge has been artificial lift, Lay said. The wells have to be placed on artificial lift immediately after drilling out the fracture sleeves because of low reservoir pressure. The company has experimented with various methods to do so.

Lay added that the “the biggest impediment right now to our development is commodity prices.” He said “it’s difficult to develop Clinton horizontals at $30 oil.”

Lay added that without problems, the wells have taken about 24-25 days to drill and another two to three days to complete. They use far less sand and fluids than a shale well, and the company has projected revenue from the wells to be about $7 million, compared to $1 million from a vertical well in the play. The horizontals use about 60% less land than a typical shale well and finding costs for them are about 31% lower than a vertical well.

Lay’s presentation filled the conference room at the Columbus Hilton hotel, where the winter meeting was held. An OOGA spokesman said afternoon walk-ins had pushed total attendance to just under 1,000. Hundreds were on hand to hear Lay’s update, and it was easily the most attended session of the day, ending in a series of questions from an interested audience.