Following a recent workover program in the Niobrara Formation in northeastern Colorado, EnerJex Resources Inc. has been able to achieve a more than 300% production increase from its project there, the company said Tuesday. 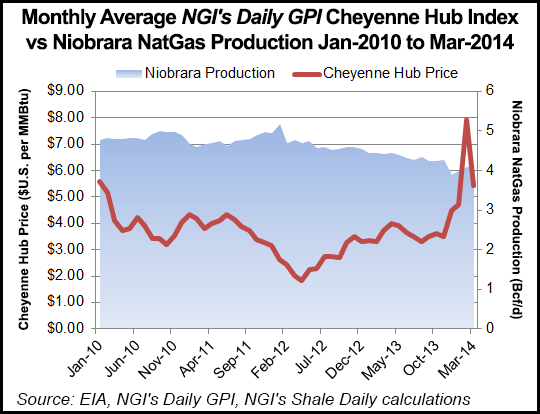 EnerJex did a workover on eight vertical wells that produce natural gas from the Niobrara at a depth of about 2,500 feet. The wells contributed “minimal” production during the previous 12 months, and after producing for about 30 days, they have increased the company’s gross operated Niobrara production by more than 300%, from about 80 Mcf/d to about 350 Mcf/d.

The aggregate cost of completing all eight workovers was less than $100,000, and EnerJex has identified an additional five or so workover candidates, the company said. Including overriding royalty interests, EnerJex gross production from the project is now approximately 475 Mcf/d.

EnerJex recently filed 17 drilling permits in Sedgwick County, CO, where it said it has identified dozens of high-ranked drilling locations based on 3D seismic analysis. The company is also soliciting bids for drilling and completion operations, along with pipeline construction and the upgrade of an existing tap into the Trailblazer pipeline that EnerJex previously acquired. Direct access to the Cheyenne Hub market significantly improves the economics of the company’s project, along with the attractive terms of its leases, which have a high net revenue interest of 87.5%.

Several confirmation wells were drilled on EnerJex’s existing acreage in the area during the past few years. One of these wells was flow tested and achieved a production rate of more than 600 Mcf/d with no water on a 16/64-inch choke with a bottom hole pressure of 771 psi. Management said the area is particularly attractive for development based on the Niobrara formation’s greater depth, higher reservoir pressure, and lower water saturation compared to the company’s existing area of production. Drilling and completion costs for new wells in this project area are expected to be about $225,000 with finding and development costs of less than $1.00 per net Mcf.

EnerJex’s Niobrara project consists of about 58,000 acres that have been high-graded from an original position of 330,000 acres based on the analysis of 114 miles of 2D and 165 square miles (105,000 acres) of 3D seismic data. The company has identified more than 150 high-ranked Niobrara drilling locations on its acreage.