Gulf of Mexico (GOM) player Energy XXI, which has made a name for itself through production expertise and horizontal drilling finesse, is taking over EPL Oil & Gas Inc. in a friendly merger that would create the largest public independent on the Outer Continental Shelf (OCS). Proforma production would be close to 65,000 boe/d. 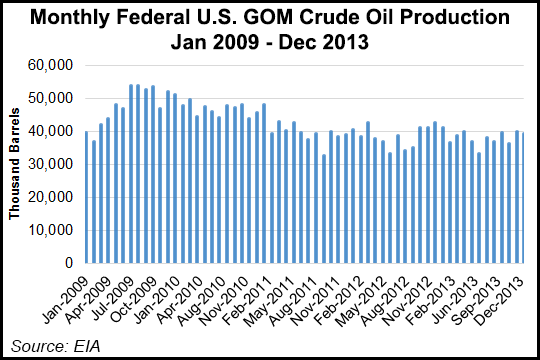 All of EPL’s outstanding shares are being acquired for $2.3 billion, about $39.00/share including debt, which when complete would create a company with an enterprise value of about $6 billion. Once the transaction is completed — expected by mid-year — Energy XXI shareholders would own about 77% of the combined company, with the remaining 23% held by EPL’s shareholders.

“This puts us on a different playing field,” Energy XXI CEO John Schiller said Wednesday during a conference call. “The real distinction is the asset base” with stakes in 10 of the top Shelf fields. “Big oilfields get bigger.”

EPL is bringing not only a lot of potential reserves but “superior strength in geoscience,” said Schiller. “On the flip side, we’ve made our living on production,” including a staff of production-focused engineers. Energy XXI doesn’t spend much of its capital on exploration; it prefers to acquire fields with exploitation value.

“You can’t forget about the synergies” between the two companies either, said the CEO. “There’s a lot in this deal.”

Energy XXI’s offshore operations are concentrated in the OCS, where it has more than 400,000 acres and almost 7,000 square miles of 3-D seismic data. Leaseholds are in blocks that include West Delta, Grand Isle, South Timbalier and South Pass, and it holds partnerships with ExxonMobil Corp. to develop Vermilion; with Fieldwood Energy LLC in Main Pass; and with Freeport McMoRan Copper & Gold Inc.’s oil and gas division to develop ultra-deep reservoirs, including the Davy Jones field.

Merging with EPL, which has 273,713 net acres in the offshore, would hand Energy XXI complementary and adjacent interests in 37 producing fields concentrated in nine core producing areas: Ship Shoal, East Bay, South Timbalier, South Pass 78 and 49, West Delta, Main Pass, Eugene Island and South Marsh complexes. An estimated 91% of proved reserves, 88% of production and 91% of revenues are associated with the fields, which EPL operates and holds a 90% stake by reserves, similar to Energy XXI’s 94%.

EPL already was planning to sell stakes in the Eugene Island 330 and South Marsh Island 128 blocks and they were not included in the proforma numbers.

“EPL’s assets and operations closely resemble our own, predominantly oil, with some of the highest margins in the industry and extraordinary opportunities for reserves and production growth through development and exploration activities,” Schiller said.

EPL CEO Gary Hanna, who held a separate conference call to discuss the merger, said the combination would create an “unrivaled operator” on the Shelf. EPL shareholders “will benefit from synergies across the board, a high-grading of the drilling portfolio and opportunities to expand across the Gulf of Mexico.”

EPL independent year-end reserves estimates at the end of 2013, including the recently acquired Eugene Island 258/259 field, are estimated to contain net proved and probable reserves of 106.3 million boe, 71% weighted to oil. Proved reserves are estimated at 54.9 million bbl of oil and 139.2 Bcf of natural gas, or a total of 78.1 million boe, 70% proved developed. In 2013, EPL reported total assets valued at $1.86 billion, with net income of $85.3 million.

“This acquisition adds meaningfully to our reserves, production, infrastructure and acreage positions, complemented by seismic data and field studies,” Energy XXI’s Ben Marchive said. He is executive vice president of exploration and production. “Upon completion, the combined company will own and operate…cumulative production exceeding 80 million bbl of oil each, with ample opportunity to grow organically by increasing recovery from those known reservoirs as well as by exploring around and below the producing horizons.

“The combined company’s larger presence on the Central Gulf of Mexico shelf can drive capital costs lower and operating efficiencies higher. In addition, we will be able to apply horizontal drilling and other exploitation expertise across the expanded portfolio, while leveraging advanced seismic data to explore subsalt and deeper horizons across the region.”

The acquisition, scheduled to close in June or July, is expected to be immediately accretive to shareholders. The value for EPL represents a 37% premium to its 30-day average closing price and a 34% premium for its closing price on Tuesday. The aggregate consideration is to be paid 65% in cash and 35% in Energy XXI common shares. EPL stockholders may elect to receive $39.00/Energy XXI share; 1.669 shares for each EPL share; or $25.35 in cash plus 0.584 share.

Schiller is to remain chairman and CEO, with the headquarters still in Houston. One member of EPL’s board would join the Energy XXI board. The completion requires shareholder approvals and regulatory OKs.