Houston-based Baker Hughes Co. is on the prowl to secure stakes in low-carbon ventures and bring deep-pocketed partners on board as it revamps its energy technology portfolio. 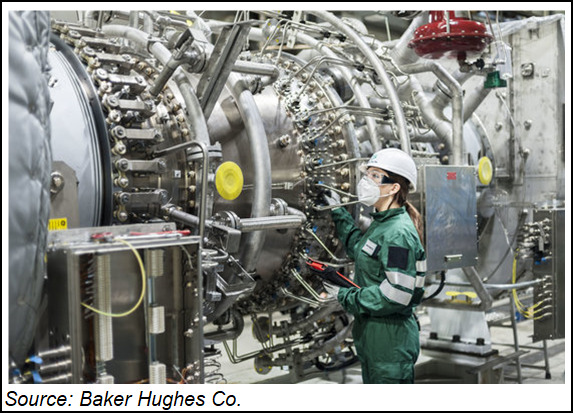 The new collaboration is centered around decarbonizing the two companies’ operations and  more broadly, the energy and industrial sectors.

The pact comes because there is an “urgency around the energy transition,” Baker CEO Lorenzo Simonelli said. Moving beyond high-carbon fuels “requires collaboration to accelerate actionable steps to reduce emissions in various ways.”

As a first step, Shell is negotiating a two-year supply agreement to provide some of Baker’s U.S. facilities with power and renewable energy credits.

Baker’s global renewable electricity consumption this year is estimated at 22%, and it is expected to grow by 2-24% annually. Negotiations also are underway for Shell to supply facilities in Europe with up to 100 GWh of renewable power. In addition, Shell may provide an on-site “solar solution” for a Baker chemical blending plant in Singapore.

A “broader collaboration” is planned “to identify other opportunities,” the partners said. Among them are “low-carbon technology solutions” for Shell’s liquefied natural gas (LNG) fleet. The integrated major is the world’s No. 1 LNG supplier.

Simonelli during the third quarter conference call said LNG equipment orders were up, with double-digit growth expected in 2022.

“The current environment illustrates the need for policymakers to focus on the utilization of natural gas as a baseload fuel that can be combined with renewable energy sources to provide a cleaner, safer, more affordable and more reliable source of energy to populations around the world,” Simonelli told analysts.

There are opportunities for the company to provide Shell’s LNG fleet with “technology upgrades and compressor rebundles,” according to the MOU. Rebundling involves upgrading compressor equipment to improve efficiencies and increase pressures.

Also on the table are co-investments with Shell and “new models” to decarbonize various sectors.

“Shell and Baker Hughes both have clear ambitions to decarbonize and have already made progress through technical innovations,” said Shell’s Harry Brekelmans, director of Projects & Technology. The expanded collaboration is “taking it one step further. It will enable us – and our partners – to push the boundaries of what can be achieved and move even closer toward our net-zero targets.”

What Is Turquoise Hydrogen?

Baker also has snapped up a 20% stake and a board seat in Ekona Power Inc., a British Columbia firm that is developing turquoise hydrogen production technology. The novel technology is designed to leverage existing natural gas reserves to produce low-carbon hydrogen, according to the companies. Financial details were not disclosed.

Turquoise hydrogen is produced by splitting natural gas (methane pyrolysis) into hydrogen and solid carbon. The natural gas is used as a raw material, and the carbon dioxide (CO2) emissions are not directly generated.

According to Baker, Ekona’s technology uses “combustion and high-speed gas dynamics in a reactor to separate feedstock methane into hydrogen and solid carbon.” The method reduces the CO2 emissions, “versus the traditional and prevalent steam methane reforming process.” The process is designed “to easily integrate with standard equipment for natural gas and hydrogen applications, including carbon separation and hydrogen purification, thus simplifying industrial process integration.”

Baker has been making substantial commitments in hydrogen and other unique low-carbon technologies. In July it took a 15% stake and a board seat in Germany’s Electrochaea GmbH, which manufactures synthetic natural gas from green hydrogen and CO2. It also is working with Electrochaea to commercialize an integrated carbon capture and utilization storage (CCUS) solution.

The Ekona platform “builds on our growing and diverse portfolio of decarbonization technologies, including blue and green hydrogen, CCUS and emissions management solutions,” said Baker’s Rod Christie, executive vice president of TPS. “Through the adoption of this technology, the industry can leverage existing and abundant natural gas reserves to produce lower carbon hydrogen and accelerate its use across the energy value chain.”

The technology “has the potential to produce hydrogen at costs on par with conventional steam methane reformers, while drastically reducing greenhouse gas emissions,” Ekona CEO Chris Reid said. “In addition, our solution isn’t reliant on CO2 sequestration, so it has the potential to be quickly and broadly deployed across various industries and market regions.”