Some of the industrial sectors with the hardest carbon footprints to abate are also predicted to be key future consumers of natural gas, but energy transition experts see signs of change coming quicker than previously predicted. 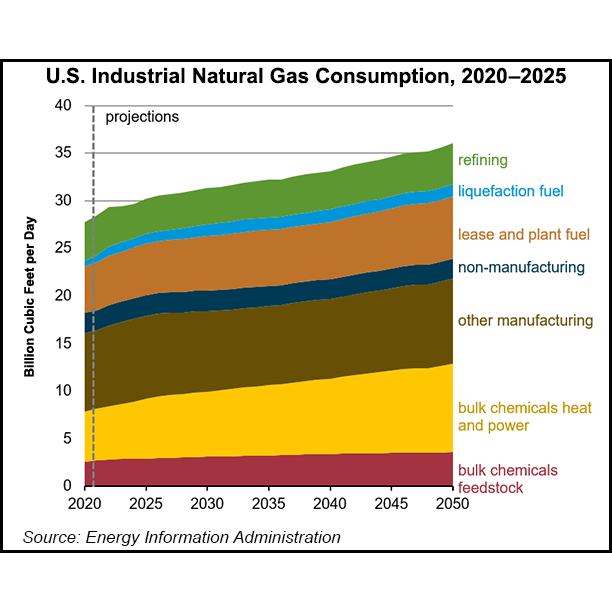 From 2020 to 2050, industrial use will make up more than 75% of natural gas demand growth, according to the U.S. Energy Information Administration (EIA). Most of that sustained increase is attributed to the fact prices for gas are expected to remain lower than historical levels over the next 30 years.

Those lasting dynamics have protected some heavy industries from investing in new emissions technologies, according to Varun Sivaram, senior director for clean energy and innovation in the office of the U.S. Special Presidential Envoy for Climate.

Will Green Hydrogen Be Competitive?

During CERAWeek by S&P Global in Houston, Sivaram said the difference is clear when comparing sectors that have largely embraced a transition to clean energy – like in electrical systems – to steel, aluminum, cement and chemicals. In contrast, he said the energy transition for heavy industry across the globe “really hasn’t started.”

In the EIA’s latest energy outlook released this month, analysts predicted consumption of natural gas would grow by 4.7 Bcf/d in the next three decades from the bulk chemicals industry alone. Most of the gas used in the bulk chemicals category is used to generate steam and electricity for manufacturing, but up to one-third will likely be used as chemical feedstock.

Even though pricing structures may be helping some industries maintain the status quo, experts believe those same dynamics will accelerate a transition away from gas once there is an economic tipping point.

Jules Kortenhorst, CEO of the sustainability research non-profit RMI – formerly the Rocky Mountain Institute – said that research from the group suggests there is already a competing fuel source on the rise that will look far more attractive to heavy industry in the near future.

“It is crystal clear before the end of this decade that green hydrogen will out-compete natural gas for many of the hard to abate sectors,” Kortenhorst said.

Kortenhorst, previously the founding CEO of the European Climate Foundation and a member of the Dutch parliament, said RMI published its study on the economics of green hydrogen and other fuel sources just before the invasion of Ukraine escalated. In the coming months, he said RMI would update the study with information on what is currently happening to markets.

Ukraine War as a Driver

Varun and Kortenhorst were both confident that spiking commodity prices would act as encouragement for industries feeling the economic pinch to take transition technologies seriously.
While massive spikes in natural gas prices caused Europe and the United States to start using historically high volumes of coal, increasing emission totals, Kortenhorst believes European Union countries will double-down on an embrace of renewables to phase out reliance on Russia.

But, like some of the world’s top energy executives, energy transition experts also warn against expecting immediate relief from renewable or alternative fuel sources during the crisis.

Varun said that hard to abate sectors such as heavy industry are in a “different technological phase” than other parts of the global economy, and the build-up for any transition will likely take the next decade to execute.

That transition plan will also still likely include fossil fuels, including natural gas, as other alternatives continue to scale up. In the steel industry, for example, Varun believes government policy and corporate investment should incentivise a path from traditional furnaces to more equipment powered by natural gas, before finally transitioning to electric arc furnaces.

“U.S. oil and gas continues to be a strength, and at this critical moment, it is a way that the United States is continuing to maintain energy independence,” Varun said.

The energy transition, in whatever form it may take, isn’t happening in a vacuum, and evolving geopolitics could be increasing the pace of change.
Bans by allies of Ukraine on Russian aluminum, nickel and palladium, of which Russia is a major global supplier, have caused metal prices to skyrocket, which has also impacted the estimated cost of future energy infrastructure projects.

On Tuesday, European Union (EU) governments also announced the backing of a new import levy on iron, steel, cement and aluminum produced under less rigorous emissions standards than the EU.

Varun said heavy industry has its own unique set of challenges that seem to be mounting, but it also has a windfall in developing new technologies, requiring billions in investment dollars instead of the trillions needed to transition electrical systems.

Varun said market data is already indicating that the large price tags for technologies to transition steel and aluminum manufacturing will likely have enough cost-savings to avoid higher prices for consumers.