Energy Transfer LP (ET) co-founder Kelcy Warren, 64, said Thursday he is handing the reins over day-to-day duties in 2021 to his two top executives, but he would remain executive chairman of the Dallas-based midstream giant. 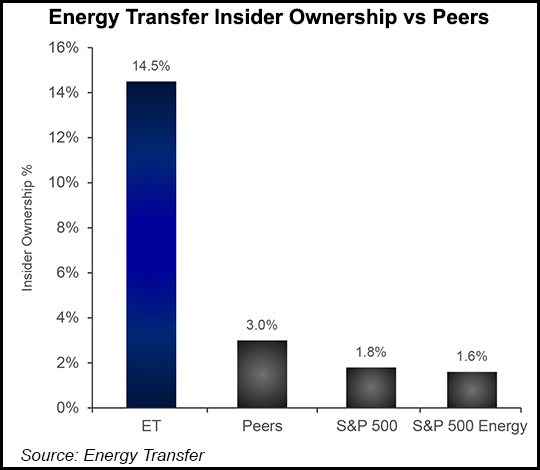 President/COO Mackie McCrea is joining CFO Tom Long to become co-CEOs in an Office of the CEO to jointly direct the master limited partnership (MLP). Warren would continue to be “actively involved” in the strategic direction.

“Although I am stepping away from the day-to-day management of our business, I will continue to be intimately involved in the strategic growth of Energy Transfer,” Warren said.

Warren’s oversight is deep, as the leading investor in the publicly operated MLP.

Warren co-founded the partnership in 1996 with Ray Davis. The company at the time had about 200 miles of natural gas pipelines and 20 employees. Today, ET has one of the most diversified portfolios of gas, oil and natural gas liquids (NGL) assets in the United States.

The portfolio is concentrated in natural gas midstream, intrastate/interstate transportation and storage, as well as oil, NGL and refined product transportation/terminaling.

In addition, ET has a boatload of NGL fractionation assets, along with various acquisition and marketing assets. It also has its fingers in liquefied natural gas (LNG), held through ownership of Energy Transfer Operating LP’s Lake Charles LNG Co., which has an export project on the drawing board in Calcasieu Parish, LA.

ET has long set its sights on growing its vast operations, with an interstate gas pipeline segment alone that runs across 19,270 miles with 21 Bcf/d of throughput, while the Texas intrastate system runs 9,400 miles with capacity of 22 Bcf/d. It also has 41,000 miles-plus of gathering pipelines across the nation with an estimated 8.8 Bcf/d of processing capacity.

During the second quarter conference call led by Long and McCrea, ET announced it was reducing its capital spending and lowering its sights on adding projects because of the oil price crash.

“We went through a very aggressive growth spurt, and it’s been painful because it’s lasted longer than we expected and it cost more than we expected,” Warren said during the call. “But now it’s about over, and we’re relieved that it is.”

McCrea first joined the partnership in 1997 as senior vice president of Business Development. He has served as Group COO and chief commercial officer (CCO) of Energy Transfer Operating and most recently as president and CCO of ET. McCrea also serves on the board.

Long, CFO since February 2016, for five years was executive vice president and the financial chief for Regency Energy Partners LP until it was acquired by ET in 2015. Long previously held executive positions with Matrix Service Co. and DCP Midstream Partners LP. He serves on the boards of ET and Sunoco LP, and he chairs USA Compression.

McCrea and Long “have greatly contributed to our success, which I know they will continue in their new roles,” Warren said. “I have the utmost respect for them personally and professionally, and I know that they, along with the rest of the senior management team, will continue to provide outstanding leadership for our more than 10,000 employees and value for our unitholders.”

Warren, one of President Trump’s top energy industry fundraisers, has faced criticism as has his company. ET was criticized by ethics groups for appointing Trump’s former Energy Secretary Rick Perry to the board of the general partner. Perry was involved in decisions directly impacting ET, including the myriad challenges to Bakken Shale oil conduit Dakota Access Pipeline LLC. The Sunoco-run Mariner East gas system under construction in Pennsylvania also has faced setbacks, drawing the ire of regulators and landowners. And last month, there was a gas release on an 18-inch diameter segment of ET’s Florida Gas Transmission pipeline, the second in about two weeks.

In reaction to the announcement, analysts with Tudor, Pickering, Holt & Co. said “McCrea and Long are longtime executive team members and have been increasingly Wall Street-facing in recent years, so it comes as little surprise to see them elevated to their new roles.”

With Warren still involved in the strategic direction, “it remains to be seen if a shift in policies is on deck. We expect a fairly muted reaction from the market pending updated views on company direction — most notably whether there is any change in management thinking on the appropriate distribution level as the path to deleveraging remains murky.”