Energy Transfer (ET) said it experienced a natural gas release Thursday on an 18-inch diameter segment of its Florida Gas Transmission (FGT) pipeline, the second in about two weeks. 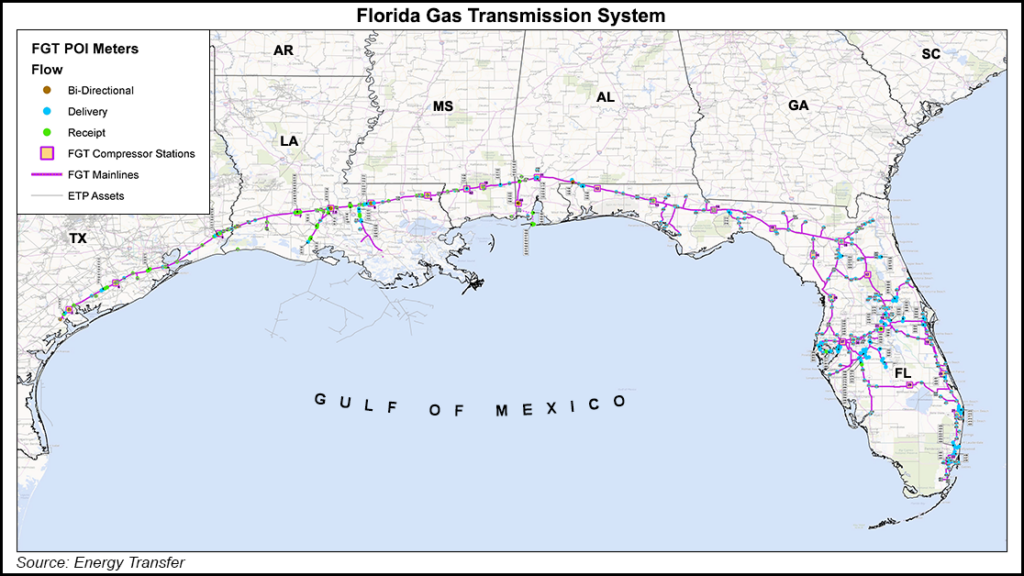 The segment of pipeline, which runs along the Florida Turnpike, was shut in so ET could isolate the incident area and safely stop the flow of gas, ET spokesperson Vicki Granado told NGI. The gas that was released from the isolated section was completely blown down in about 30 minutes, she said.

There were no injuries or interruptions to customer deliveries as the gas flow was diverted to another pipeline in the system, according to Granado. The cause of the release is not known at this time; however, “there will be a thorough investigation into the matter” and updates would be provided “as information becomes available.”

This is the second incident ET has experienced along the FGT pipeline this month. A previous rupture caused an explosion Sept. 10 on a smaller, 12-inch diameter segment of the 654-mile FGT system. The line feeds a Duke Energy power plant and a Sanford Florida Public Utilities meter station, between Orlando and Daytona Beach.

The incident resulted in 125 customers temporarily losing gas service. No injuries were reported in that incident, but 20 people were evacuated and burn damage was reported to surrounding vegetation.

The Pipeline and Hazardous Materials Safety Administration (PHMSA) ordered the Sanford pipeline to remain shut until the agency approves a plan to restart it at reduced pressure. Under PHMSA’s corrective action order issued Sept. 18, the company is required to further examine the pipeline for other potential problems.

In the order, PHMSA said it found that the continued operation of the affected segment “without corrective measures is or would be hazardous to life, property and the environment.” Furthermore, given the segment’s age, “there is an increased likelihood that there are other locations along the pipe that are subject to the same operational cycles and fatigue, heightening the risk of imminent failures along the pipe.”

ET has until Monday (Sept. 28) to request a hearing.