Dallas-based Energy Transfer LP on Monday agreed to acquire Tulsa’s SemGroup Corp. in a unit-and-cash deal worth an estimated $5 billion, a deal that would expand crude and gathering systems from Western Canada to the Gulf Coast. 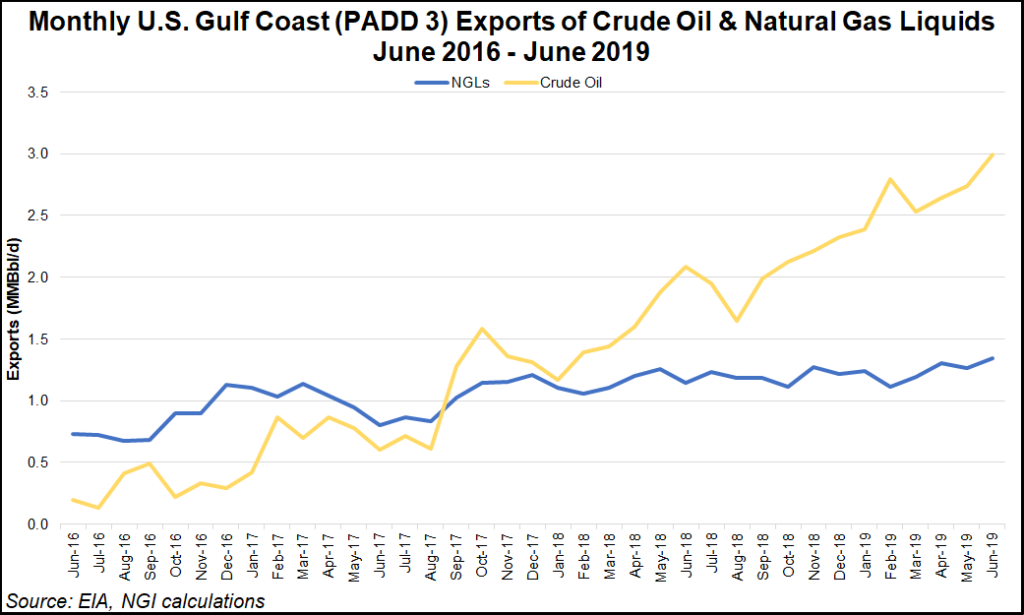 The acquisition would expand Energy Transfer’s crude and natural gas liquids (NGL) infrastructure in the Denver-Julesburg (DJ) Basin in Colorado and the Anadarko Basin in Oklahoma and Kansas, connecting the basins with oil terminals in Cushing, OK.

Energy Transfer’s Gulf Coast portfolio would benefit from the Maurepas Pipeline and connections to the St. James, LA, refining complex. In addition, the merger would provide oil gathering and transportation assets in the Western Canadian Sedimentary Basin.

In conjunction with the merger, Energy Transfer has launched plans for the Ted Collins Pipeline to connect HFOTCO to its Nederland Terminal east of Houston. The 75-mile pipeline, with initial capacity of about 500,000 b/d, could begin operations in 2021, connecting two of the largest crude terminals in the United States.

The Ted Collins system as designed would provide access to more than 1 million b/d of existing crude export capacity and expansions to 2 million b/d-plus at the Nederland and HFOTCO terminals.

Energy Transfer, which handles more than 4 million b/d, said customers also would have the flexibility to access a very large crude carrier project planned from the Nederland terminal.

Under terms of the merger, Energy Transfer agreed to trade 40% cash/unit and 60%/unit equity for each SemGroup share, which translates to about $6.80/unit in cash and 0.7275/unit.

The combined company could generate more than $170 million of annual run-rate synergies, consisting of commercial and operational synergies of $80 million, financial savings of $50 million and cost savings of $40 million, according to Energy Transfer.

“No way around it,” said analysts with Tudor, Pickering, Holt & Co., the acquisition “represents a sharp reversal from recent messaging on portfolio management, capital discipline and accelerated deleveraging.” The announcement “is a setback versus the progress seen in 3Q2019, as the company reduced its 2019 capital spend and indicated a willingness to evaluate asset sales…

“While the acquisition offers potential for Gulf Coast terminal integration, we view the deal as a step back for the Energy Transfer rerate story.”