Basis differentials at the Waha Hub, situated at the heart of the Permian Basin, could “blow out materially” over the next year or two, and Energy Transfer Partners LP (ETP) is poised to take advantage, management said. 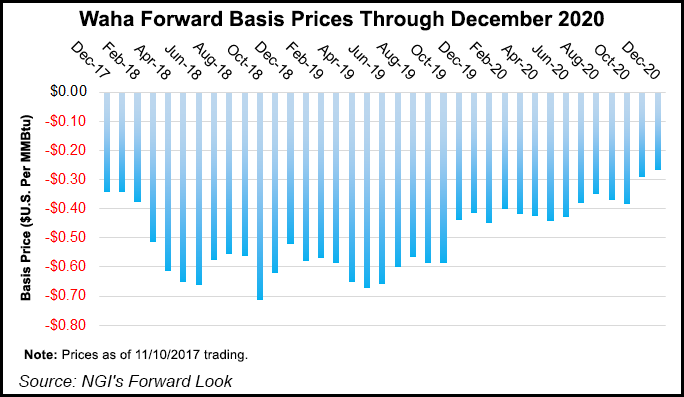 During a conference call last week to discuss 3Q2017 results, COO Marshall McCrea said the Dallas-based mid-streamer sees opportunities to capture value as all signs point to a continued increase in associated natural gas volumes from the Permian and potential constraints at Waha, which is located in Pecos County, TX.

“We’re probably more well-positioned than anybody,” McCrea said. “There’s not a lot of capacity out of West Texas. Really, the only way out other than west is through our pipe to Mexico, which we still believe will be some time down the road before they’re fully ramping up. So, getting volume growth out of there is going to depend on either a new project or existing capacity, of which we have.

“So, we’re extremely optimistic over the next 12-14 months that the basis will blow out, probably blow out materially. We’re well-positioned to take advantage of that. We’re actually going to be feeding that with a lot of these projects that we’re bringing on and ramping up with our processing plants and with our Red Bluff upstream intrastate.”

“Including the Panther Plant, which came online in December of last year, Rebel II is our third plant in the Midland Basin,” CFO Thomas Long said. “We’re nearing capacity in the Permian, and we’ll need Rebel II as soon as possible to meet growing producer demand in the region.”

The proposed Red Bluff pipeline is an 80-mile, 30- to 42-inch diameter pipe that would travel through the Delaware. The pipe would carry 1.4 Bcf/d from ETP’s Red Bluff and Orla plants, as well as multiple third-party plants, to Waha. That project, which has an anchor shipping commitment from Anadarko Petroleum Corp., is expected to cost $300 million and come online in 2Q2018, management said.

“We continue to be believers, the industry does, the producers do,” McCrea said. “If you look at what’s happened to oil prices and everything that’s going on in the Middle East, it points to nothing but significant volume growth out of the Permian Basin and a more significant need to move those volumes out.

“We certainly continue to evaluate other ways to more efficiently and inexpensively move volumes out by expanding systems that we have or using systems that we have in different manners,” he said. “We’ll continue to evaluate that, and we do believe we’ll play a part of that growth on the expansion out of the Waha area. But in the meantime, we’re pretty excited about what’s going to happen as far as basis spread and how it benefits our assets over the next couple of years.”

In the interstate segment of its business, ETP confirmed that the next phase of its 3.25 Bcf/d Rover Pipeline remains on track for completion by the end of the year.

“For Phase 1B, drilling operations on our remaining” horizontal directional drills (HDD) “are nearly complete,” Long said. “We expect this phase will be in service and that we will be collecting demand fees on all of Phase 1 before the end of this year. In addition, construction of Phase 2 continues, and we feel confident the entire pipeline will be in service by the end of the first quarter of 2018.”

Following a moratorium on HDD activities issued earlier this year, FERC recently provided ETP with several reports from third-party technical advisor J.D. Hair & Associates covering “the remaining HDDs on Rover, which should allow us to resume construction on these drills in short order. Both of these developments provide us with more certainty in meeting our projected in-service dates,” Long said.

Rover, which has been flowing about 1 Bcf/d east-to-west through Ohio, is designed to deliver Marcellus and Utica shale gas to markets in the Midwest, Gulf Coast and Canada.

By segment, ETP saw third quarter interstate natural gas transportation volumes increase to 6,074,783 MMBtu/d from 5,385,679 MMBtu/d in the year-ago quarter. Management attributed the increase this quarter to Rover, as well as to increased backhaul deliveries on its Trunkline pipeline, increases on the Tiger pipeline due to higher Haynesville Shale production and increases on the Transwestern pipeline due to demand in the west and “opportunities in the Texas intrastate market.”

“We continue to expect earnings in this segment to pick up once the remaining sections of Rover are in service and we are able to efficiently provide end-user customers with Marcellus and Utica gas,” Long said. “In addition, we will also be receiving significant revenues from our backhaul capabilities on Panhandle and Trunkline.”

ETP reported quarterly revenues of $6.97 billion versus $5.53 billion in 3Q2016. Revenues for general partner Energy Transfer Equity LP (ETE) totaled $9.47 billion for the third quarter, up from $7.71 billion in the year-ago period.