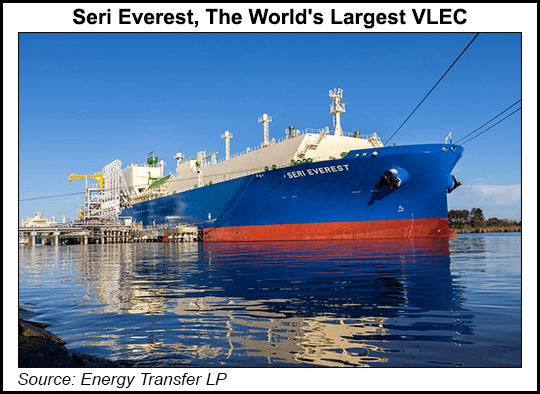 Dallas-based ET said the VLEC was loaded by Orbit Gulf Coast NGL Exports LLC, its joint venture with Satellite Petrochemical USA Corp. The Seri Everest, the world’s largest VLEC according to ET, departed from Orbit’s newly constructed export facilities at ET’s Nederland Terminal southeast of Houston near Port Arthur on Sunday (Jan. 17). The vessel was destined for Satellite’s Lianyungang ethane cracker in China’s northeastern Jiangsu Province, with an expected arrival at Lianyungang Port in mid-February. It is the “largest single shipment of ethane to date,” ET said.

Orbit’s export terminal at Nederland, one of only three U.S. ethane export terminals, includes a 1.2 million bbl ethane storage tank and an estimated 180,000 b/d ethane refrigeration facility. The project was one of a small handful of major capital projects ET undertook in 2020 amid the oil and gas downturn.

Under the JV, ET is the operator of Orbit’s assets, which also include a newly constructed 20-inch diameter pipeline originating at ET’s fractionation and storage facilities in Mont Belvieu, TX, for ethane deliveries to the Nederland terminal and domestic markets in the region. ET also completed its buildout of infrastructure at Mont Belvieu to supply ethane to Orbit’s pipeline, as well as at Nederland to load the ethane onto VLECs.

Under separate agreements, ET is providing Satellite with about 150,000 b/d of ethane under a long-term, demand-based agreement, along with storage and marketing services.Raymond James & Associates Inc. struck an upbeat tone when it comes to ethane recovery in 2021. The projected increase in recovery “should happen everywhere” other than the Bakken Shale, analysts said, “perhaps providing more of a volume tailwind than would have otherwise been expected” for midstream companies.