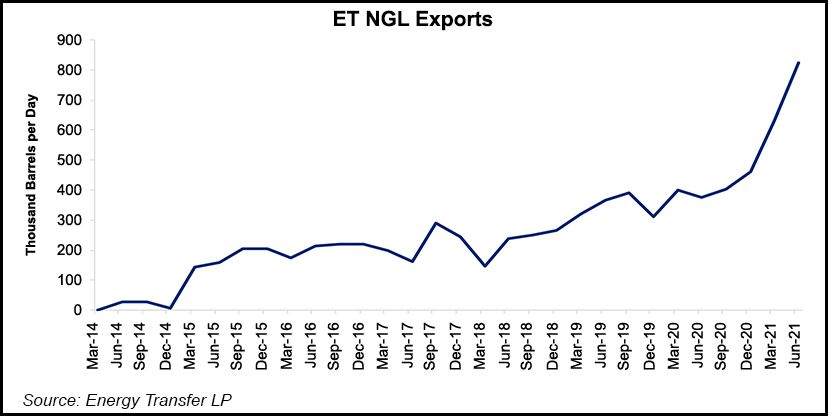 The Dallas-based company also said a newly operational expansion project is boosting its transports of oil in the current quarter.

Energy Transfer, whose pipelines held up amid Winter Storm Uri in Texas last winter when others’ did not, said Tuesday in reporting earnings that it continued to collect fee income from natural gas transports to meet demand during the historic deep freeze. It also benefited from rising natural gas prices this summer amid robust domestic cooling demand.

Second-quarter earnings in Energy Transfer’s intrastate transportation and storage business rose 20% from a year earlier. It reported an increase of $52 million in transportation fees, with $39 million due to revenue related to Uri.

The company also has ramped up its NGL and refined products transportation business to meet mounting global demand amid the recovery from the coronavirus pandemic. It said earnings in the division rose about 9% from a year earlier.

Energy Transfer said NGL and refined products terminal volumes rose nearly 60% from a year earlier. In addition to the pandemic recovery and higher throughput volumes, it cited increased export volumes at its Nederland Terminal in Texas due to the initiation of service on its propane and ethane export pipelines late in 2020.

“The NGL segment is just unbelievably exciting. We can’t say enough about our team and all the effort we put together at the end of 2020,” co-CEO Marshall McCrea said Tuesday during a call with analysts.

Total 2Q2021 revenue more than doubled from a year earlier to $15.1 billion. The company said its net income rose to $908 million from a $292 million loss a year earlier.

Additionally, in June, the company said it began service on its Cushing to Nederland expansion project, which utilizes a crude oil pipeline previously servicing the Permian Basin. The new service provides connectivity to transport crude from the Denver-Julesburg (DJ) Basin in Colorado and Cushing, OK, to Energy Transfer’s Nederland, TX, terminal.

“We are now capable of transporting approximately 65,000 b/d of oil from the DJ Basin and Cushing area to Nederland, and we are seeing a steady growth in volumes,” co-CEO Thomas Long said during the earnings call.

“The first phase of this project is fully contracted with a large majority of those contracts coming from third-party shippers,” Long said. Additionally, “we are moving forward with phase two of this project, which will increase the capacity to 120,000 b/d.”

He said the second phase is expected to be in service in 1Q2022 “and is underpinned by third-party commitments. Minimal capital spend is required for this project.”

The company said it invested $355 million in growth capital expenditures (capex) during the second quarter and expects to invest about $1.6 billion in all of 2021. It estimated capex in the range of $500 million to $700 million for both 2022 and 2023.

“Capital discipline and deleveraging continue to be among our top priorities,” Long said.

During the second quarter, Energy Transfer reduced outstanding debt by $1.5 billion. It reduced its long-term debt by about $5.2 billion over the first six months of the year. The company now has about $45.6 billion in debt.