Continental Resources Inc. and Energy Transfer LP executives said Wednesday the future prospects for the Bakken Shale are strong, and they expect the Dakota Access Pipeline (DAPL) to continue to serve the region’s oil producers. 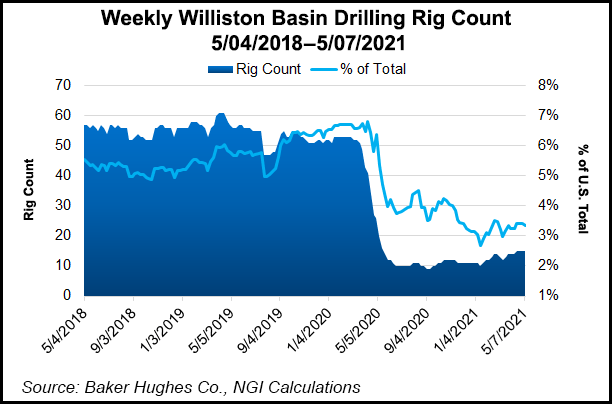 Speaking at the Williston Basin Petroleum Conference in Bismarck, ND, Continental Executive Chairman Harold Hamm and Energy Transfer CEO Kelcy Warren discussed the outlook for Energy Transfer’s DAPL, the outlook or U.S. energy, as well as and the cyberattack on the Colonial Pipeline.

Hamm said Continental is not planning a “huge ramp up” in the Bakken this year, “but we’re certainly getting back to business. We’re completing everything  we’re drilling.” The company has acquired assets in the Powder River Basin, but the Bakken remains key.”We haven’t taken our eye off of North Dakota at all.”

Continental is one of Energy Transfer’s largest customers in the Bakken. In a separate appearance, Warren said operations overall are returning to normal. He also is bullish about the prospects for U.S. natural gas and natural gas liquids (NGL).

“Our crude business is so-so, but our NGL business is doing great and the spreads from the Permian to the Gulf Coast in Texas now are about $1,” Warren said.”Natural gas is really good.”

Regarding the Colonial cyberattack, Warren said Energy Transfer has experienced “several” in the past. The incident should remind Americans “how important pipelines are to this nation…“I can’t wait to find out what actually happened in the Colonial incident.”

The Supervisory Control and Data Acquisition (SCADA) system on Colonial was unaffected. “If you still have your SCADA you can still operate for the most part, so that’s what I don’t understand in this case.”

Hamm called the incident a clear “terrorist attack.” He said Continental has a bulwark of defense against cyber terrorism, as there are thousands of hits everyday on pipelines and the electric grid. “We have to treat it this way and get very serious about it.”

Hamm also reiterated the importance of DAPL to the nation’s energy and economic security. “It’s not going to be shut down; it’s very important,” Hamm said. “Energy security is national security, and therefore, it means everything to the nation.”

Said Warren, “We’re not shutting down DAPL; it’s not going to happen. I think it is business as usual” until the U.S. Army Corps of Engineers issues an environmental impact statement. “After that, it will stop being news.”

Warren doesn’t see another DAPL project being built in the country anytime soon. The pipeline still has capacity, and by the end of this year expects to add horsepower to support deliveries of up to 1 million b/d.

Warren said in general, U.S. interstate pipelines are face issues going forward. “We’ve built billions of dollars of these pipelines in the past 10 years, but I don’t see those types of projects happening for a while,” he said. Events like the Colonial incident could change that view, though, he said.