Dallas-based Energy Transfer LP owns and operates another 14,000 miles of natural gas and oil pipeline in Arkansas, Louisiana, Oklahoma and Texas after completing its merger earlier this month with Enable Midstream Partners LP. 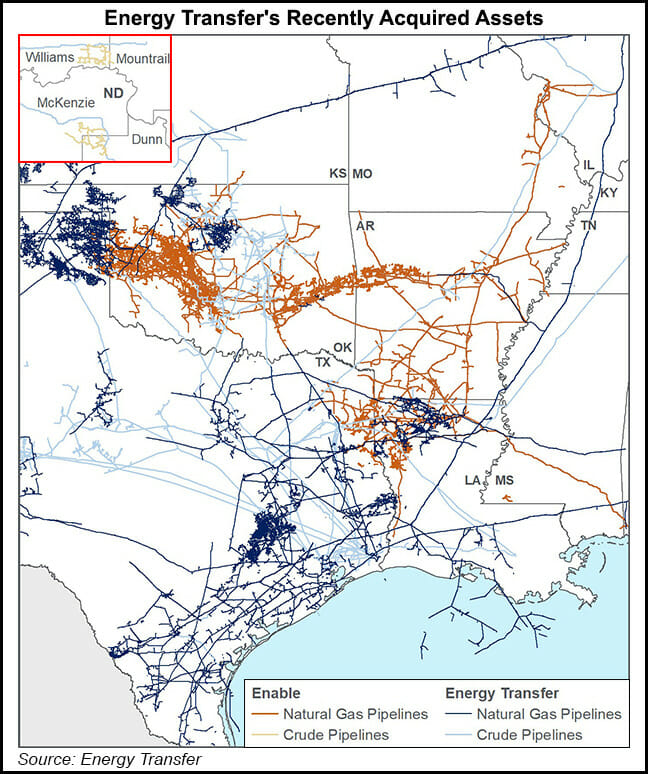 The $7.2 billion tie-up, first announced in February, strengthens the midstream and gas transportation systems in the Anadarko Basin in Oklahoma, along with intrastate and interstate pipelines in Oklahoma and surrounding states.

The merger also boosts Energy Transfer’s gas gathering and processing assets in the Arkoma Basin across Oklahoma and Arkansas, as well as in the Haynesville Shale in East Texas and North Louisiana. Altogether, Energy Transfer said it has more than 114,000 miles of pipelines and other infrastructure.

When the deal was announced, Energy Transfer said it could build off the combination to increasingly meet global demand for U.S. liquefied natural gas (LNG) exports. “Energy Transfer will further enhance its connectivity to the global LNG market and the growing global demand for natural gas as the world transitions to cleaner power and fuel sources,” it said at the time.

Enable received federal approval in June to construct the Gulf Run natural gas pipeline. The $540 million pipeline project is backed by a 20-year commitment for 1.1 Bcf/d from cornerstone shipper Golden Pass LNG. Gulf Run is expected to be placed into service in late 2022. Golden Pass is underway in Sabine Pass on the upper Texas coast.

Energy Transfer, meanwhile, continues to face setbacks in its bid to expand the controversial Dakota Access oil pipeline. The pipeline subsidiary in September asked the U.S. Supreme Court to weigh in on the case.

Energy Transfer said the merger with Enable is set to bring fee-based cash flows from fixed-fee contracts. The combined operations are expected to generate annual run-rate cost and efficiency synergies of more than $100 million.