Statoil SA, which controls a broad portfolio of onshore and offshore leaseholds in North America, is reducing its workforce again, adding on to an enormous reduction in the industry’s workforce since the start of the year. One major Canadian drilling group expects up to 25,000 industry drilling jobs to be gone by the end of the year, while another put direct and indirect job losses in Canada at close to 185,000. 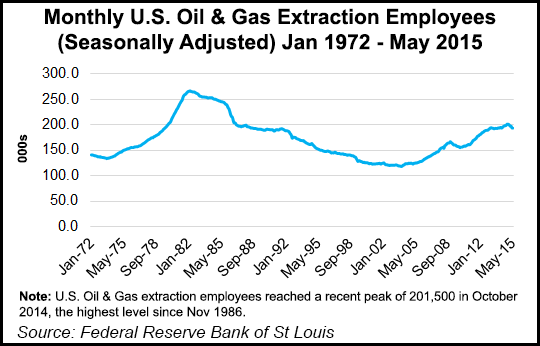 Norway’s Statoil confirmed Tuesday that it plans to reduce its 20,000-plus workforce by another 1,100-1,500, with 525 consultants also cut. From its Houston headquarters, the company manages leaseholds in the Bakken, Eagle Ford and Marcellus shales, offshore holdings in the Gulf of Mexico and Alaska. In Canada, it controls oilsands leases in Alberta and offshore tracks in Newfoundland. Where the job losses will be wasn’t detailed, but they are part of a plan to save $1.7 billion in capital costs in 2016 and beyond.

“We regret the need for further reductions, but the improvements are necessary to strengthen Statoil’s competitiveness and secure our future value creation,” COO Anders Opedal said.

Statoil’s Magne Hovden, senior vice president for People and Organization, said the decisions to reduce the workforce “as a consequence of increased efficiency, will be made in each business area, based on assessments involving leaders and employee representatives, and local consultation. When this is completed, we will know the accuracy of the current estimated range. This work will take place in the business areas in the period from August to November.”

Meanwhile, a study released by Canada’s Petroleum Labour Market Information (PetroLMI) Division of Enform, a safety association for the upstream, is forecasting that up to 185,000 jobs overall may be lost this year across the country — direct and indirect jobs — because of the decline in commodity prices. In 2014, the industry supported more than 720,000 total jobs in Canada, with about two-thirds concentrated in Alberta.

The Canadian Association of Oilwell Drilling Contractors expects about 25,000 drilling jobs to be lost because of weak pricing. The association revised its drilling forecast for the second time this year, “reflecting a sustained effort by contractors to manage lower demand and subsequent employment losses.”

Since the previous revision in January, the number of operating days in Canada is expected to decline by an additional 10,320 days, or 13%. A sharp drop in the number of overall operating days means an estimated reduction of 25,110 total jobs in 2015, down almost 50% from the 2014 total of 49,950.

“Potential policy changes in Alberta with respect to royalties, other factors such as liquefied natural gas activity in British Columbia and depressed commodity prices, means our members must continue to streamline operations and remain agile,” said President Mark Scholz. “This is our second revision to the drilling forecast, and we will continue to assess the situation as external factors dictate.”

PetroLMI is forecasting the biggest job losses in oil and gas engineering/construction firms, with up to 75,000 employees cut, followed by support services involved in exploration and development, where 26,000 jobs may be chopped.

The oil and gas industry downturn today is “larger in magnitude but comparable in scale” to the global recession in 2008-2009, PetroLMI’s researchers said. However, this industry downturn “poses different challenges” than the recession and impacts will “likely unfold in very different ways across industries and provinces.”

PetroLMI’s researchers also see uncertainty for the industry in 2016 and beyond. There are no indications of a bounce in 2016 as industry did in 2010 following the recession. More critical for companies going forward is a reliance on “creative recruitment practices,” such as improving current workforce skills, along with “effective management and retention of skilled and experienced workers.”

Houston’s Swift Worldwide Resources, an oil and gas industry recruiter, estimated that about 150,000 industry jobs were lost through the end of May. The pace of layoffs has slowed, but the U.S. sector has seen “the fastest and steepest decline” of all regions worldwide. Swift tracks public and private data.

“Where data is not publicly available we have kept our ear to the ground and made assumptions based on likely impact,” said Swift CEO Tobias Read. “Our assumptions remain conservative and the likelihood is that total job losses probably substantially exceeds Swift’s forecast.”

A lot of the job losses have come from the exploration sector, both majors and independents, but the big cuts have been overall across the oilfield services sector, where the Big Four — Schlumberger Ltd. Halliburton Co., Baker Hughes Inc. and Weatherford plc — have announced huge job losses (see Shale Daily, April 21; Feb. 11; Feb. 5; Jan. 20; Jan. 16).

Contractors are contracting too, with Nabors Industries Inc. among those announcing it would reduce its workforce (see Shale Daily, April 22).

Many small firms are underwater, and there have been some bankruptcy announcements too. The “only substantially buoyant market” is the Middle East, with Saudi Arabia drilling “is at a 20-year high,” Swift noted.