Oil and gas patch output is typically measured in barrels or cubic feet, but gross domestic product (GDP) is another yardstick by which to chart growth, and that’s particularly true in North Dakota, home to the Bakken Shale, the U.S. Energy Information Administration (EIA) said Friday. 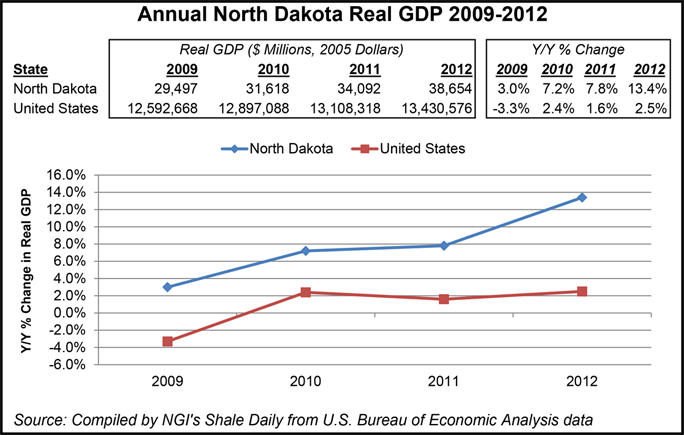 Last year, North Dakota reported the highest annual increase in real per-capita GDP of any state in the country for the second year in a row. In 2012, real per capita GDP in North Dakota increased by nearly 11% from the previous year, according to statistics released last month by the U.S. Bureau of Economic Analysis. “This is considerably higher than the national growth rate of less than 2% and is more than three times as large as the growth rate in Texas (3.27%), the state with the next highest annual growth,” EIA said.

Real per capita GDP has been rising steadily for the past decade in North Dakota, even as incomes around the rest of the country have fluctuated. Particularly high growth started in 2007, when increased production of oil and gas in the Bakken region was made possible by horizontal drilling and hydraulic fracturing.

Between 2007 and 2012, annual crude oil production in the state increased fivefold, and annual natural gas gross withdrawals more than tripled, according to EIA. As a result, the real GDP of the state mining industry has grown by nearly 42% in the past year with a compound annual growth rate of about 39% between 2007 and 2012.

Additionally, between 2007 and 2012, the transportation and warehousing industry in North Dakota saw a compound annual growth rate of about 16%, with a 35% increase in 2012 alone, thanks largely to infrastructure and services needed to handle materials, such as frack sand, necessary for oil and gas activity.

North Dakota’s population increased as the mining and transportation industries were developed. Last year, the U.S. Census Bureau said North Dakota had the highest population growth rate in the country, averaging more than 2% between July 1, 2011, and July 1, 2012. The accommodation and food services industry and the real estate industry have also grown, expanding at annual compound growth rates of 7% and 9%, respectively, from 2007 to 2012.