The U.S. energy industry workforce continues to age and remains a serious hurdle that has to be overcome, according to analysts with Raymond James & Associates Inc. 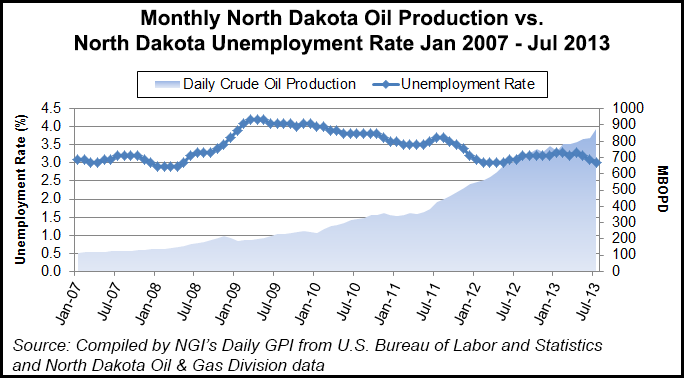 Pavel Molchanov and J. Marshall Adkins in a note Monday said even with salaries into the six-figure range for entry-level positions straight out of college, a shortage remains for U.S.-educated petroleum engineers (PE) and other skilled professionals. The ones currently working are getting older, they noted.

“This poses a human capital problem, one that will have to be addressed if the employment gains arising from unconventional resources are to fully materialize.”

Raymond James historically has monitored the U.S. energy workforce by reviewing membership data from the Society of Petroleum Engineers (SPE).

After peaking in 2004 with 60% of membership at age 45 or older, more than half of the SPE members (51%) still are above the “critical” threshold, “with retirements almost certain in the next 10 to 15 years,” said the analysts. “This means that ‘graying’ remains an issue.”

However, the proportion of younger members declining from 2004 to 2009 appears to have leveled off. More U.S. members also have joined the SPE in recent years, but it remains the case that U.S. members still comprise less than half (43%) of total membership, analysts noted. That means domestic oil and gas operators continue to rely on professionals hired from abroad.

“A related point is that, for jobs with lower skill levels, such as rig hands, there is frequently more demand than supply, especially in locations that are seen as less attractive to work in,” said the analysts.

For instance, sparsely populated North Dakota has the lowest unemployment rate of any state at 3.0%, but it’s the “epicenter” of the Bakken Shale boom, which has provided tens of thousands of jobs. By contrast, Texas has an unemployment rate of 6.4%, good compared to the national average, but more than double that of North Dakota, partly a function of the fact that oil and gas isn’t the only thing driving the state’s economy. Texas also has a larger pool of available labor.

“Think about it this way: how much money would it take for you to go work in North Dakota — especially in winter — living in motels in one-horse towns where the highest-profile amenity is an Olive Garden? Chances are, you’d prefer Houston or San Antonio — or even Midland,” said the analysts. “Hence the stories about the $30.00/hour fast food workers in North Dakota, along with $200.00/night motel rooms. Lest you think that this state of affairs is unique to the more inhospitable parts of North America, think again.”

The analysts used U.S. Bureau of Labor Statistics data from 2005-2012 to delve more deeply into U.S. upstream and midstream oil and gas jobs.

“Not all of these are unconventional jobs, but we think it’s safe to say that most of them are,” said the duo. The biggest surprise to the analysts were the gains in Pennsylvania, not in Texas and North Dakota.

Over the seven-year period, nearly 90% of the job growth in Pennsylvania came from oil and gas, the highest percentage of any state, and the epicenter of the Marcellus Shale boom. Pennsylvania was followed by Louisiana and New Mexico, both with job gains of around 70%. In North Dakota, the percentage of jobs growth over the five-year period was 20%.

There’s a generally subdued outlook for U.S. jobs growth, except for energy, which is driven by unconventional gas and oil, noted the analysts.

“While any long-term projections such as this are inherently imprecise, the effect on the overall jobs picture is quite material; these jobs can erase around 50 basis points off the U.S. unemployment rate over the next decade,” they said. “To be clear, growing energy employment will not be sufficient to single-handedly restore pre-crisis employment levels, but it has been a leading driver of the U.S. employment growth that has occurred over the past few years.”