Two trade associations representing the oil and natural gas industry urged a federal appeals court to reject an effort by California, New Mexico and a coalition of environmental groups to reinstate, albeit temporarily, an Obama-era rule governing associated natural gas flaring and venting on public and tribal lands. 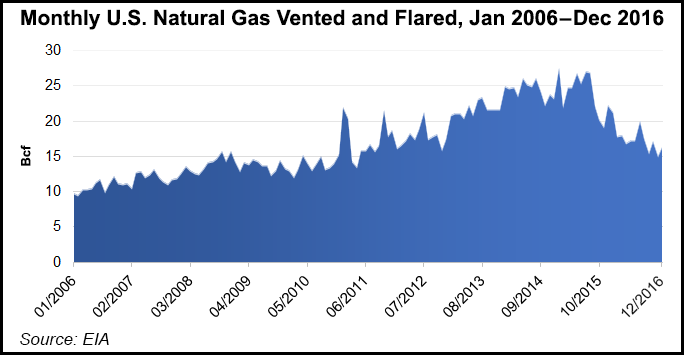 Meanwhile, more than 100 members of Congress, all but two Democrats, sent Interior Secretary Ryan Zinke a letter stating their “strong opposition” over plans to revise or rescind the Waste Prevention, Production Subject to Royalties, and Resource Conservation Rule, aka the venting and flaring rule. They also urged Zinke to extend the public comment period and hold public hearings over the matter.

On Thursday, the Independent Petroleum Association of America (IPAA) and the Western Energy Alliance (WEA) filed a motion with the Tenth Circuit Court of Appeals in Denver. They argued that an April 4 decision by a federal judge in Wyoming to stay parts of the rule from taking effect is not reviewable “because it is not an injunction and does not function as one.”

Wyoming District Court Judge Scott Skavdahl had ruled that the phase-in provisions of the rule should be placed on hold to give Interior’s Bureau of Land Management (BLM) more time to ultimately revise or rescind the rule. California, New Mexico and a coalition of 16 environmental groups that support the rule filed an immediate appeal, but Montana and Wyoming, like IPAA and WEA, have a filed motion to have the appeal dismissed.

“By staying the phase-in provisions of the Waste Prevention Rule, the order [by Skavdahl] preserves the regulatory landscape that was in place during all of 2017,” IPAA and WEA said in their filing. “As a result, the order will not cause more methane emissions than occurred during 2017.

Last February, environmental groups had prevailed in U.S. District Court for the Northern District of when Judge William Orrick rejected a proposed rule by the BLM to delay enforcement of parts of the venting and flaring rule until January 2019. Attorneys general for California and New Mexico were parties to that lawsuit.

IPAA and WEA filed a lawsuit against the rule in Wyoming district court in November 2016. Montana and Wyoming filed a separate lawsuit, and North Dakota and Texas subsequently joined as petitioners. The two lawsuits were combined at the end of November.

In a letter dated Thursday, the lawmakers, led by Rep. Diana DeGette (D-CO) and Sen. Tom Udall (D-NM), asked Zinke to extend the public comment period over changes to the venting and flaring rule for 90 days. The comment period is currently scheduled to expire on Monday (April 23).

“Every year an estimated $2 billion dollars’ worth of natural gas is wasted by the oil and gas industry nationwide, with $330 million of that being drawn from public or tribal lands,” the legislators wrote. “Weakening the rule or returning to the status quo ante would be a giveaway to the oil and gas extraction industry at the expense of the American taxpayer.”

The lawmakers pointed to a Government Accountability Office report from 2010 that found flaring was costing states, tribes and federal taxpayers as much as $23 million in annual royalty revenue, as well as an analysis by the BLM that rescinding the rule outright would add 1.8 million tons of methane, 2.67 million tons of other volatile organic compounds and 20,030 tons of hazardous air pollutants into the environment over a 10-year period.

The letter was signed by 105 lawmakers, including 66 Democratic members of the House. Thirty-nine senators also signed the letter, including Angus King of Maine and Bernie Sanders of Vermont, two independents who caucus with the Democrats.