The energy market downturn has played havoc with the bottom line for the oil and gas industry, but it has had a silver lining, weeding out the bottom feeders, the “brilliant jerks,” who may have been doing their jobs but who were unconcerned about a company’s success, energy executives said Wednesday. 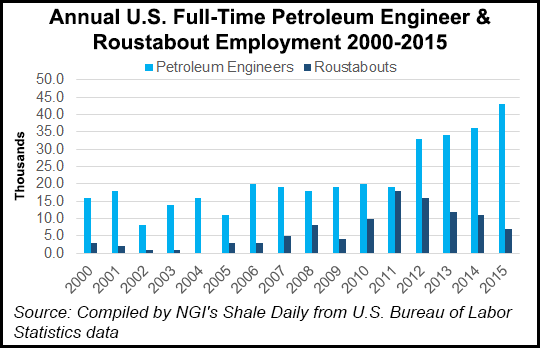 The concept of “human capital” as an industry’s best asset was the theme of a morning panel at the Rocky Mountain Energy Summit (RMES). The 28th annual meeting, which ends Thursday, is sponsored by the Colorado Oil & Gas Commission. In an afternoon “unscripted” session, executives also discussed how they have sustained and motivated their employees.

“All of us went through pretty difficult times here the last couple of years, and it’s these times that are the perfect opportunities to drive the culture to get to a better place,” DCP Midstream CEO Wouter van Kempen said. “You have to be sure you have the right people to be competitive and successful.”

About 13% of all of the natural gas produced today in the United States goes through one of DCP’s facilities, but the downturn forced a rude awakening for the Denver-based operator. In April it eliminated 300 positions, about 10% of the workforce across its 17-state footprint, following a 20% staff cut in early 2015 (see Daily GPI, April 5).

“We’ve had to do some very difficult things” since late 2014, van Kempen said. “We did go through some senior management reductions, which we believed was the right time and the right thing to do for the organization.”

DCP’s management team met in November 2014 and conducted what van Kempen said was an unusual survey. The team members were asked to name the “brilliant jerks” in the company, the “ones that make the numbers but did it in the wrong way, didn’t do it with the right values, the right culture,” van Kempen said. The set of 50 or so names was posted on a board, with 40 of the same people on everybody’s list.

“All of the company knew who the brilliant jerks were,” he said. “Right then, all of those people were gone.” The people fired were performing and making the numbers, but “in the long run, those were people who were a cancer to the organization…It sent a powerful message…It matters how we show up. It matters how we drive culture. People come and go. Assets come and go. Culture is what you want to instill.”

For Cimarex Energy Inc. CEO Tom Jorden, “in the long run, the only source of competitive advantage is the culture…Values that permeate the hallways, that’s what separates Cimarex…Every organization, when it looks at its people, has to make fundamental distinctions” between those who are “poor performers and stellar performers…The stellar performers fundamentally drive a company, and it’s important for a company to recognize that, to make that distinction…”

Both Cimarex and DCP management could see the downturn before it hit and they began to prepare, helping to weather the storm, while many of their peers have faltered.

“We have a very open culture,” Jorden said. “At Cimarex, our philosophy has been to stay as small as we can for as long as we can, eliminating unnecessary levels of management. We manage by eye contact, get out and about, get to know people face to face…As we entered the downturn, we spoke honestly with people about what it did and did not mean. I’m happy to stay we got through this without across the board layoffs…But we had some sessions with very straight talk with people. We had to tighten our belts, control costs, be innovative.”

The Cimarex chief told employees that the downturn “may be the new normal and not to wait for the rescue boat. We’re not shipwrecking.” He transferred some of the things he had learned when reading Life of Pi, to not spend too much energy on hope and not enough on action.

He took those words about “how to make a living in this environment. The rescue ship was not coming…”

Keeping the staff motivated hasn’t been as difficult for Cimarex because of where primarily operates, in two of the “red hot” and competitive areas of the country, the Permian and Anadarko basins (see Shale Daily, Aug. 5). Activity overall may have slowed, but operations teams have focused relentlessly on innovations and eyeing competitors to gain a better understanding of their leaseholds.

“The way to effectively manage an organization is to have very few principles but to constantly reinforce them,” Jorden said. There are no motivational posters on the walls at Cimarex offices, “but every one of our employees understands what their role is and what needs to be accomplished…Focus is a real element of success, a real important part of communication in the workforce.”

Best practices “spread like wildfire,” Jorden said. “We want a meritocracy of ideas…” If someone is threatened at Cimarex by even low-level employees speaking up and offering suggestions, “you are at the wrong company.”

The downsized oil and gas industry also is preparing for the “silver tsunami” as many top executives near retirement age. Jorden is not too concerned.

“It’s a huge challenge,” Jorden said. “Cimarex has a ripe old age of employees 50 to 65, and then we’ve got a lot of people 25 to 35, and not too much in between. But I’m an optimist. We are giving young people a wonderful challenge. Don’t put limits on young people and what they can do. Let people go as far as they can. we have people one or two years out of school managing $50 million projects. Anybody that cries that one generation is going to sink us isn’t working with the people I’m working with today…

“I’m very optimistic that they will rise to the challenge. I think the industry will move forward.”

In the afternoon unscripted panel discussion, Noble Energy Inc. and Bayswater Exploration & Production LLC executives offered advice to people who may be facing their first downtown.

“I think if you are facing your first downturn, you can expect about five more in your career,” Denver-based Bayswater CEO Steve Struna told the younger audience members, who laughed at his comment. Bayswater, formed in 2004, owns and operates leaseholds in the Rockies, the Midcontinent, California and the Permian.

“You are going to get through it,” Struna said. “You need to be open minded about your roles and be prepared to change. Become a generalist instead of a specialist. If you are a reservoir engineer, learn about production. Learn about finance. Make yourself more valuable. This downturn is a tough one, as difficult as any that I remember, but look forward and make yourself valuable.”

Noble Senior Vice President Chip Rimer, also co-chair of this year’s RMES, has been in the oil and gas business for 33 years and now oversees U.S. onshore operations. There are “always going to be ups and downs in this industry, but…you can make an impact every day that will have a huge value for the country, for Colorado…It’s a place you can make a difference…And there may be opportunities to do other things.”

During the oil industry downturn in 1986, Rimer was transferred by then-employer Arco Oil & Gas Co. to a field office in Midland, TX, a move he fought at the time.

“When I look back now, it was the greatest thing that ever happened to me,” he said. “Challenge yourself…Opportunities occur in these times.”