With Louisiana and Texas communities and businesses facing substantial losses after Hurricane Laura, charitable efforts by the oil and gas industry and beyond are providing a helping hand. 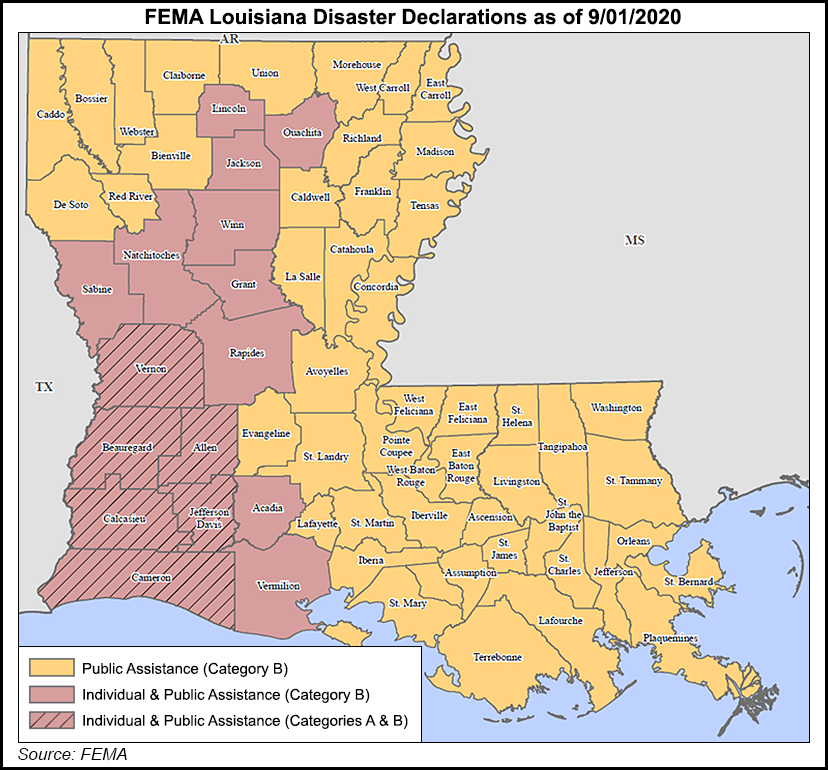 “I want to thank Cheniere for stepping up during our state’s time of need with this commitment,” said Louisiana Gov. John Bel Edwards. “It is important for all of us to join together in recovery efforts for our communities in southwest Louisiana.”

Cheniere’s Sabine Pass export facility in Louisiana revealed no serious damages after Laura. The facility performed as usual throughout the storm.

“Most importantly, all of our employees are safe and accounted for,” CEO Jack Fusco said earlier this week. “After the storm, we carefully assessed our facility and discovered no significant damage, and we have begun executing startup plans to safely resume operations.”

“We know that while our facility emerged from this storm, many of our coworkers, friends and neighbors need assistance. Our pledge of $1 million, in addition to our volunteer time and other efforts, will help the region quickly recover from the impacts of Hurricane Laura,” Fusco said.

Sempra Energy, another LNG operator on the Gulf Coast, said the Sempra Energy Foundation pledged $500,000 to help communities. It also is planning to raise an additional $1 million toward recovery efforts.

“Our hearts go out to all the families that have been impacted by Hurricane Laura,” said Sempra Energy Foundation president Lisa Alexander. “We are proud to operate essential energy infrastructure in Southwest Louisiana and Texas and are committed to living our company’s values by supporting those communities, and our employees who work and live there, throughout the recovery process.”

On the power side, utilities are pressing forward with restoration efforts and fundraising to help the communities they serve. At one time after Laura came ashore, more than 650,000 customers were without power.

Entergy Corp., and subsidiary Entergy Louisiana which serves about 1.09 million electric customers in 58 parishes and provides natural gas service to about 94,000 customers, had as of early Wednesday restored 74% of the outages caused by Laura. Severe transmission damage occurred in Cameron and Calcasieu parishes. In those areas, a total of 6,637 poles, 11,886 spans of wire and 2,926 transformers were damaged.

As of Tuesday, Entergy has thousands of restoration workers in Louisiana, with some Southeast Texas crews redirected to the southwestern part of the state. About 335,145 individual outages in Louisiana had been restored as of Tuesday.

Entergy’s restoration force consists of 23,200 workers that includes employees, contractors, as well as mutual assistance crews from other companies. According to the utility, it is the largest restoration force it has ever mobilized.

More than 1,400 Southern Company resources were responding as part of the mutual assistance program, which organizes resources from hundreds of energy providers across the United States following major events. Distribution linemen, vegetation management personnel, support staff, native contracts and others are among those who were sent by the electric operating utilities to respond to Laura’s destruction.

“After Hurricane Harvey displaced many of our family and friends in 2017, people from other cities and states helped Houston recover by donating their time, money and supplies,” said Turner. “Today, we are being called to action for our neighbors who were in the path of Hurricane Laura and are now experiencing great suffering and loss. We cannot sit idly by while they are in need.”

The program was accepting donations at the George R. Brown Convention Center in downtown Houston and at Gallery Furniture. Kroger stores also have collection boxes at each location. Donations are to be sent to Port Arthur, Orange and Beaumont in Texas, as well as Sulphur and Lake Charles, LA.