The Independent Petroleum Association of America (IPAA) and the Western Energy Alliance (WEA) late Friday sued to halt the Bureau of Land Management (BLM) natural gas flaring and venting rules, some of which are set to take effect in January. 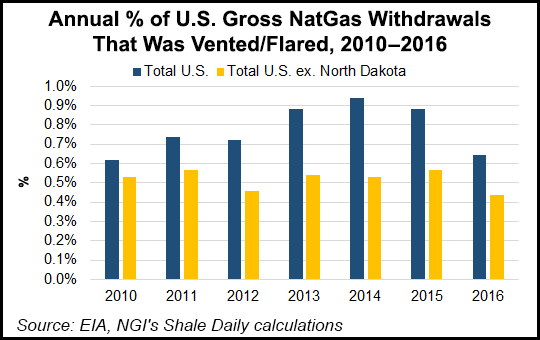 Operators are facing a “game of regulatory chicken,” given earlier court rulings against the Department of Interior agency, said the lawsuit, which was filed in U.S. District Court in Wyoming.

BLM in early October outlined plans to temporarily suspend or delay parts of the Waste Prevention, Production Subject to Royalties and Resource Conservation Rule — aka the venting and flaring rule — until January 2019.

A few hours later, a federal judge in San Francisco ruled the Trump administration broke the law by attempting to postpone the Obama-era rule, which governs associated natural gas flaring and venting on public and tribal lands. U.S. Magistrate Judge Elizabeth Laporte ruled that the Trump administration violated the Administrative Procedure Act by proposing to delay compliance dates. Laporte’s ruling set up a Jan. 17 deadline to comply with several provisions of the rule.

“The Interior Department has already signaled its intent to delay the impending compliance deadlines by one year, but it must abide by a lengthy notice and comment process for public input,” said IPAA spokesman Dan Naatz. “While we applaud this step, our member companies need to know what rules they will be operating under in just a few months’ time.”

WEA President Kathleen Sgamma said the lawsuit was “necessary to ensure companies do not have to comply with a rule that is being completely rewritten by the agency.”

Complying with the rule would cause operators “irreparable harm,” IPAA and WEA said.

Since groups opposed to oil and gas development inevitably may attempt to litigate suspending the rule, “we are seeking relief while everything gets sorted out,” Sgamma said. “It doesn’t make sense for companies to comply with a rule that is so obviously a violation of the Clean Air Act.”