Oil and natural gas activity across Texas, northern Louisiana and southern New Mexico improved during the third quarter, but at a slower pace than earlier this year, a survey of energy executives has found. 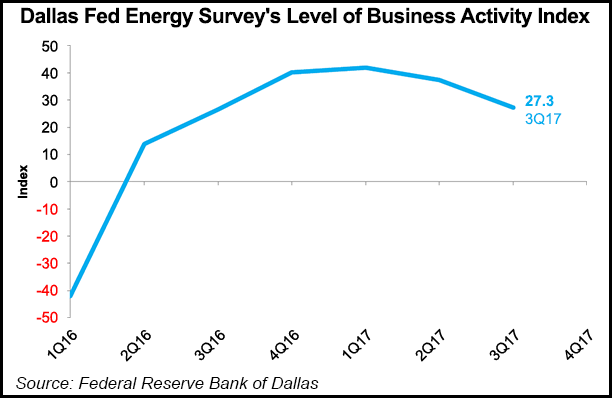 The “Dallas Fed Energy Survey,” compiled every three months by the Federal Reserve Board of Dallas, on Wednesday reported that the business activity index, the broadest measure of conditions facing Eleventh District energy firms, fell sequentially in 3Q2017 to 27.3 from 37.3. However, it remained positive for the sixth quarter in a row.

Data were collected for the survey from Sept. 13-21, with 143 energy firms responding — 78 exploration and production (E&P) firms and 65 oilfield services (OFS) operators.

The survey also got responses from 140 executives for a series of special questions concerning the impact from Hurricane Harvey, which made landfall in Texas on Aug. 25. Harvey forced many Eagle Ford Shale operators to shutter operations for a short period, while the Greater Houston area was swamped by record rainfall, damaging infrastructure and delaying business.

Asked to what extent businesses may be negatively affected by Harvey in six months, 62% do not expect any negative impact. Close to one-third (30%) expect businesses to be “slightly affected,” while 8% still foresee a “moderate to severe” impact.

For the broader energy sector, including midstream and downstream, executives were asked how much Harvey still may affect those operations in six months.

“More than half of the executives — 55% — expect Hurricane Harvey will still have slight negative effects on the broader energy sector six months from now,” the survey said. “Almost a quarter of all respondents (24%) expect the sector to experience moderately negative effects. Eighteen percent expect no impact from Hurricane Harvey six months from now.”

Said one survey respondent, “Harvey has demonstrated, once again, that our reliance on foreign crude can be interrupted, and we should continue to encourage domestic production.”

An OFS executive noted that business in the Eagle Ford Shale in South Texas “was only stopped for three to four days after the hurricane. Other areas saw no impact on activity. Unless the aftermath negatively impacts demand for oil, the longer-term impact should be minimal.”

Another OFS executive said “beyond the immediate storm impact, the biggest issue with Harvey will be the slow invoice and payment processing from our customers in the Houston area who were out of their offices for over a week. This will have ripple effects for weeks.”

Equipment utilization among OFS firms also rose, with the corresponding index at 34.4 in 3Q2017, down 11 points sequentially. Measures of selling prices and input costs “suggested easing pressure on margins” for OFS operators.

Labor market indexes also pointed to rising employment and employee hours, albeit at a slower pace than in the second quarter. Growth in employment was driven primarily by the OFS sector, the survey said.

The employment index was 24.6 for OFS firms versus 5.2 for E&Ps. The employee hours indexes also showed a large gap: 32.3 for OFS operators versus 3.9 for E&Ps. The aggregate wages and benefits index dipped to 18.4 from 22.8.

“Only 22.5% of firms reported increased uncertainty about the future, down from 46.7% last quarter,” according to the survey.

EQT Corp., the largest natural gas producer in the Lower 48, said Thursday it has ended another round of curtailments, but management said it won’t hesitate to continue shutting in volumes as low prices warrant.  The Appalachian pure-play had curtailed about 400 MMcf/d beginning Sept. 1, cutting 15 Bcf from third quarter production volumes. The…