Permian-focused Energen Corp. said it will increase its capital expenditure (capex) budget by 10%, to $1.1 billion, for the full-year 2015 so it can focus on development and appraisal programs in the Wolfcamp and Spraberry formations, and expects the company’s overall production to increase by nearly 20% as a result. 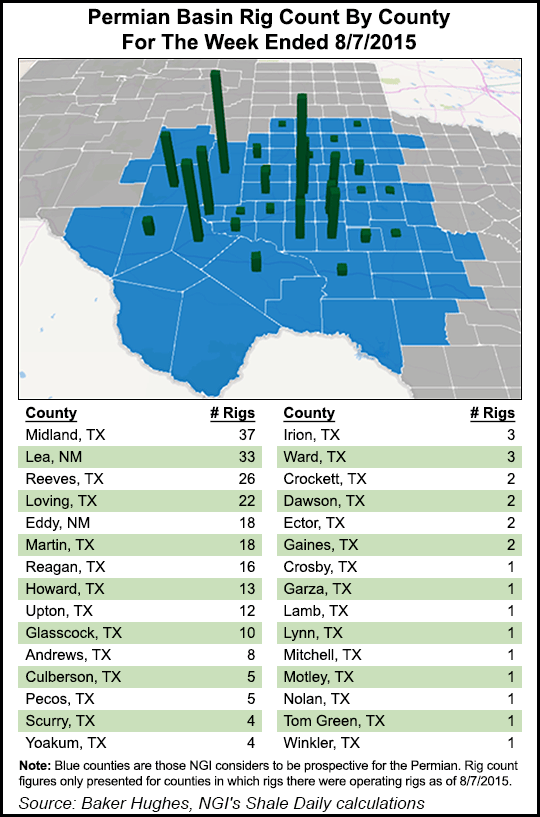 The Birmingham, AL-based independent said Thursday that it plans to drill 151 gross (143 net) wells in its 2015 drilling and development program. The bulk of the capex budget, $810 million, is allocated to the Permian’s Midland Basin for 129 gross (122 net) wells — that includes $485 million for the company’s Wolfcamp development project, and 88 gross (82 net) wells there, plus another $70 million in a Spraberry development project that calls for 12 gross (12 net) wells.

The company is spending $143 million in the Permian’s Delaware Basin for 14 gross (13 net) wells, and $63 million in the San Juan Basin, including $29 million for eight gross (eight net) wells targeting the Mancos Shale. Energen also plans to devote $60 million on an appraisal program for eight gross (eight net) wells in the Wolfcamp, and another $80 million for an appraisal program for 12 gross (12 net) wells in the Spraberry.

“We’re seeing encouraging production response from some of our changes we made in our completions, and our days to drill to total depth continue to decline to industry-best numbers,” CEO James McManus said during a conference call to discuss 2Q2014 on Friday.

Energen reported adjusted net earnings per share (EPS) of $7.66 billion (10 cents/diluted share) for 2Q2015, after subtracting a $75.1 million non-cash mark-to-market loss, and $42.9 million in an after-tax asset impairment. The company said more than 75% ($33 million) of the impairment was related to a write down of a field in the Central Basin Platform in tertiary recovery, while another $3 million covered about 775 net acres in Reeves County, TX, in its Enterprise area.

By comparison, Energen reported adjusted EPS of $26 billion (36 cents/share) in 2Q2014. The company said the decline was largely attributed to low commodity prices, coupled with higher depreciation, depletion, and amortization (DD&A) costs from increased drilling, which in turn was partially offset by the increase in production.

During the Q&A session with analysts, McManus said Energen had taken note of Exxon Corp.’s decision to bolt on 48,000 acres to its holdings in the Midland Basin (see Shale Daily, Aug. 6).

“I think you’ve seen some [acreage] trade pretty high,” McManus said. “We’re still trying to get [acreage] on a little bit better value basis. As oil continues to decline and slide, hopefully we may see some adjustment in those prices and some additional activity. There has been a good bit of activity, and I expect [we] will have some things to look at. And we would like to increase our position out there.”

In a note Monday, Irene O. Haas, analyst for Wunderlich Securities Inc. said Energen had “turned in a strong quarter,”

“While well results are looking better and better in the Delaware Basin, the company’s wells in the Midland Basin still offer the best returns for now, in our view,” Haas said. “This fall, we look forward to seeing Energen drilling its eight-well program in the San Juan Basin, which could offer positive catalysts.”