Energen Corp. management said the first quarter of 2013 was “both encouraging and challenging” as test wells in the Third Bone Spring and Wolfberry formations of the Permian Basin performed well, but cold weather and interference issues worked against the company as profits fell slightly. 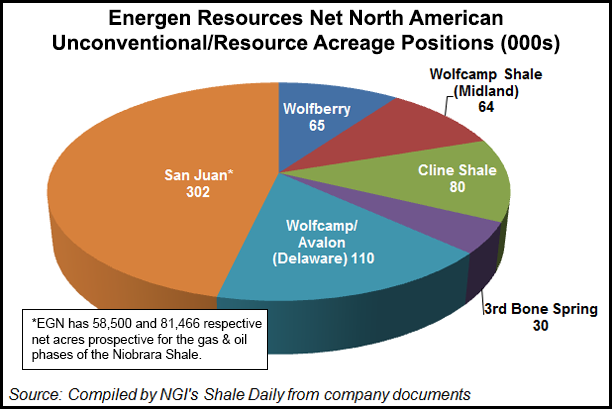 “The first three months of 2013 were both encouraging and challenging,” CEO James McManus told financial analysts during an earnings call on Monday. He said initial results from nine wells tested in the Third Bone Spring during the quarter “were excellent,” with an average initial stabilized rate of 1,230 boe/d, 74% weighted toward oil. Five of the test wells had a 30-day production average of 625 boe/d, with 71% oil.

“Two of our Third Bone Spring wells were particularly impressive, with an average initial stabilized rate close to 2,000 boe/d,” the CEO said, adding that 42 gross wells in Wolfberry tested at an average initial stabilized rate of 123 boe/d, and a 30-day production average of 109 boe/d, both weighted 75% oil. “Our Wolfberry wells responded very well to our recent switch to slick-water based stimulations…This is well above our typical type curve.”

In the Wolfcamp formation, where unit Energen Resources Corp. held 343 million boe of proved reserves in 2011, McManus said the company was “very excited” about assessing the potential of the Delaware and Midland basins that are within the Permian. “We believe that our previous success at even one of these basins holds significant positive implications for Energen, given our excellent acreage position in both areas. We continue to drill, complete and test Wolfcamp shale wells in the Delaware Basin and are preparing to start our first Wolfcamp well in the Midland Basin this week.”

McManus said four wells in the Delaware Basin begun in 2012 are now in various stages of completion or testing, while the first well from the 2013 program is awaiting completion. Energen plans to drill 10 gross (eight net) wells in the Delaware Basin in 2013. Meanwhile, in the Midland Basin, McManus said Energen planned to start drilling a test well in Glasscock County, TX, this week. The well, which the company has a 21% nonoperated interest in, would target the Upper Wolfcamp formation. Energen plans to drill six net wells in the Midland Basin this year.

“Extreme cold weather in the San Juan Basin, and some interference issues between the few new and old Third Bone Spring wells, [kept] first quarter production below our expectations,” McManus said. “We will, of course, repeat the long San Juan volumes during the year and we have remedied the interference issues. Otherwise, production in the quarter was essentially where we thought it would be after revising down our 2013 production estimate in December…We frontloaded the downward division into the first half of 2013 due to problems we identified in the fourth quarter of 2012 that we expected to continue into ’13. These include infrastructure concerns, high ethane rejection and Wolfberry completion delays.”

McManus said the company would ramp up production in order to reach its goal of 26.1-26.5 million boe by the end of the year.

“The main drivers here are continued strength of our Third Bone Spring and Wolfberry wells, acceleration of Wolfberry completions, and the addition of 20 low-cost, Mancos [Shale] oil pads in existing vertical wells in the San Juan Basin,” McManus said. “I would note to you that our current daily production rate is in line with this range.”

The Birmingham, AL-based company also said it had no intention of selling utility subsidiary Alabama Gas Corp. (Alagasco), which serves 425,000 customers in central Alabama, despite a debt rating downgrade by Moody’s Investor Service. Last Thursday, Moody’s confirmed Energen’s rating of “Baa3” with a “negative” outlook, but downgraded Alagasco from “A1” to “A2” with a “negative” outlook.

“[We believe] that Energen could reduce leverage meaningfully by the end of 2014, which could salvage its investment grade rating,” Moody’s Vice President Stuart Miller said. “However, [our] outlook remains negative to reflect the possibility that the company may not achieve its targets for reserve and production increases that are necessary to achieve the leverage reduction. In addition, in 2012 Alagasco’s leverage increased to a level that no longer supports an A1 rating. With no apparent driver for debt reduction, [we have] downgraded the rating to A2 to be more in line with the ratings of other gas utility companies.”

Asked if he would ever sell the utility, McManus at first suggested a spinoff would be possible “under the right circumstances” but later said “we are never going to separate. We are never going to. We are always going to keep the two companies together; that’s not the thinking right now.”