After posting strong results in 2Q2016, Energen Corp. is moving forward on a drilling plan in the Permian Basin that could see the pure-play operator achieve double-digit production growth in 2017. 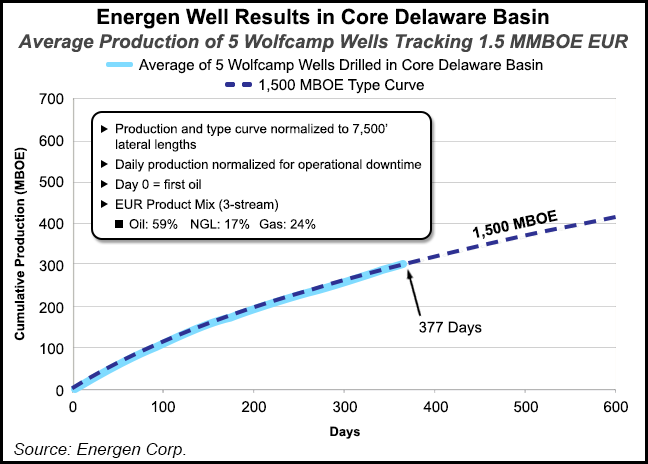 After increasing production 7% sequentially in the second quarter, the Birmingham, AL-based exploration and production (E&P) company raised the midpoint of its 2016 guidance by 2%. The company, which recently shed its remaining San Juan Basin assets to focus on the Permian (see Shale Daily, June 21), attributed its strong quarterly production to the outperformance of its horizontal wells in the Midland sub-basin.

CEO James McManus said the company is looking to build an inventory of 54-58 drilled but uncompleted (DUC) wells by the end of the year.

“While our plans for 2017 are still evolving, we believe that completing our DUC inventory in the first half of 2017 combined with additional drilling and development supports year-over-year, double-digit production growth in 2017,” McManus said.

The company attributed the Delaware results to increased flow rates resulting from optimized surface facilities. Energen said it drilled a 9,000-foot lateral in the Wolfcamp A in 22.4 days from spud to total depth with an estimated drill and complete cost of $7.2 million.

Total lease operating expenses for the quarter, including marketing and transportation, declined to $7.29/boe, compared with $9.09/boe for the year-ago quarter. Management cited lower costs for water disposal and electrical power, as well as reduced costs from fewer workovers.

Energen posted a net income for the quarter of $36.8 million (38 cents/share), compared with a net loss of $111.6 million (minus $1.52/share) in the year-ago quarter. Lower commodity prices were offset by a reduction in depreciation, depletion and amortization costs, lower net salaries and reduced general and administrative expenses, the company said.