Breaking from a prolonged downtrend that dates back to before the Covid-19 pandemic, natural gas output from seven key U.S. onshore regions is poised to grow from June to July, according to updated modeling from the Energy Information Administration (EIA). 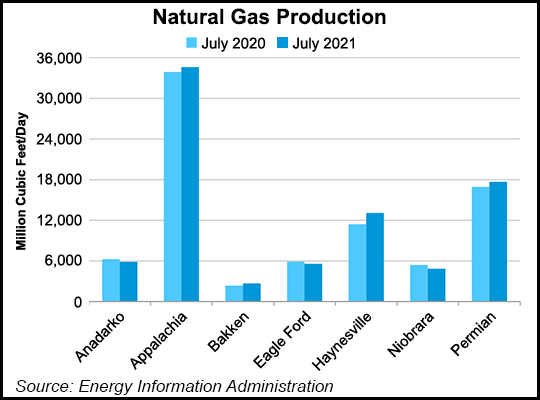 Natural gas production from the Anadarko, Appalachia and Permian basins, as well as from the Bakken, Eagle Ford Haynesville shales and Niobrara formation, is on track to rise by 50 MMcf/d from June to July to reach 84.302 Bcf/d, EIA said in the latest edition of its Drilling Productivity Report (DPR).

The Haynesville, Permian and Appalachia are set to lead natural gas output higher from June to July, with production expected to grow in those regions by 137 MMcf/d, 66 MMcf/d and 18 MMcf/d respectively. The Anadarko (down 62 MMcf/d), Bakken (down 51 MMcf/d), Eagle Ford (down 19 MMcf/d) and Niobrara (down 39 MMcf/d) are all expected to see falling production month/month.

Oil production from the seven regions, meanwhile, is set to rise by 38,000 b/d from June to July, led by a 56,000 b/d increase in the Permian. The Anadarko, Bakken, Eagle Ford and Niobrara are each projected to see small declines in output over the same period, according to the DPR data.

The total backlog of drilled but uncompleted (DUC) wells across the seven regions declined by 247 to 6,521 from April to May, according to EIA. The Permian drew down its DUC total by 115 wells month/month. The Niobrara (down 41), Haynesville (down one), Eagle Ford (down 31), Bakken (down 27), Appalachia (down 13) and Anadarko (down 19) regions all saw their respective DUC counts decline month/month as well.

New-well natural gas production per rig is projected to rise by a rig-weighted average of 30 Mcf/d across the seven regions, DPR data show, with Appalachia notably on track to see a 432 Mcf/d per rig increase from June to July.

New-well oil production per rig is expected to decline by 11 b/d month/month on average, including a 19 b/d per rig decrease in the Anadarko, EIA data show.