Encana Corp. launched a five-year strategy last year already in need of an update, as output from two core holdings, the Permian Basin and Montney formation, is exceeding all expectations, the company’s CEO said Thursday. 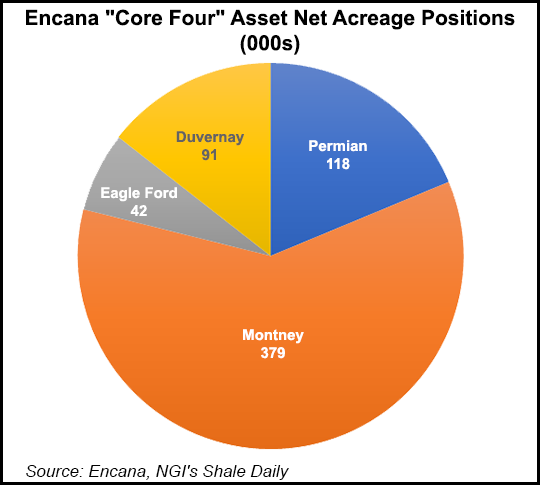 The Calgary-based independent last year began a five-year plan to maximize output on its “core four” assets: the Permian and Eagle Ford Shale in Texas and the Montney and Duvernay formations in Canada.

“We closed out 2017 with some great results, and we are set up for 2018 and beyond,” CEO Doug Suttles said during a conference call with his executive team. “The transformation we started four years ago has arrived.”

Encana began 2014 as one of the leading North American natural gas producers, with a portfolio 95% weighted to gas and 27 projects across the United States and Canada.

With gas prices stagnant and opportunities falling, Encana whittled its focus by half and then by half again. Today, most if the capital is directed to its core four, while debt has declined by around $3 billion.

So encouraged is the executive team with the makeover to date that a $400 million share buyback is planned over the next year, funded with cash on hand. Thoughts of share repurchases were out of the question only three years ago.

“We have been extremely disciplined in allocating capital to only our core assets, consistently investing over 90% into the core,” Suttles said. “This has accelerated margin growth by ensuring capital allocation choices are supporting the strategy to focus growth on the high value liquids and expand our margins.”

Last October during an investor presentation, management outlined a five-year plan to deliver a cash flow compound annual growth rate of 25% by growing margins, total production of 10-15% and liquids production of 20%.

Management said at the time it could deliver the results over the five year-period while generating free cash flow of about $1.5 billion at a $50/bbl West Texas Intermediate oil price and a $3.00/Mcf New York Mercantile Exchange (Nymex) natural gas price

“Now with only a modestly higher oil price of $55, we now believe we can generate about $3 billion of cash flow over this five-year plan…double what we showed last October,” Suttles said.

Management’s optimism resulted from beating every 2017 target, he said.

Revamped completion designs are improving efficiencies and revving up output. The company’s large-scale cube development model, combined with high-intensity completions and fracture targeting helped boost average 180-day initial production rates by more than 25% for only 9% additional cost, said COO Mike McAllister. Encana also has secured most of its expected field services and materials for 2018, with efficiencies expected to continue to offset inflation.

“A number of factors give us confidence in the efficient execution of our plan,” Suttles said. “First, we are currently at our peak activity for the year…Second, we have already contracted for the vast majority of the services and supplies required for 2018 development programs.

“And similar to 2017, we are confident that the combination of our supply chain strategy and relentless focus on efficiency will offset inflation in 2018.”

The gas strategy provides Encana with physical transportation to several different price points from Canada to Lower 48 markets. The program was “on display” in January, said Suttles, as Encana sold its Canadian gas at an average price above the Nymex gas price before financial hedges.

“A lot of these markets were impacted by unseasonably cold weather, but this highlights both the risk management and value enhancement of our market diversification approach,” said the CEO.

Managing prices for expected gas production from the Western Canadian Sedimentary Basin (WCSB) “has been a key area of focus for my team,” said Zemljak, whose approach includes securing firm service from Nova Gas Transmission and through export capacity to the Dawn Hub, the West Coast and the Chicago markets.

“The combination of these activities results in security and a WCSB portfolio price that is substantially better than the current Eagle Ford market,” she said. “And in fact, only 4% of our expected 2018 revenue is exposed to AECO gas price, with this number rising to just 5% for 2019 and 2020.”

On the oil side, Permian export infrastructure “will keep pace with supply growth over the long-term,” Zemljak said. However, Encana is maximizing regional pricing and actively manage exposure to the Midland pricing through differential hedging and from pipeline transport.

“Our oil and condensate volumes across the portfolio receive prices very close to WTI,” she said. Along with strong condensate pricing in Canada, Encana’s Eagle Ford oil is priced relative to Light Louisiana Sweet crude prices.

“Permian oil has exposure to Midland, the Gulf Coast and most recently to international markets through export shipments,” said Zemljak. “As an example of our focus of maximizing margins, we recently took advantage of our physical access to the Gulf Coast and completed to sell…into the European market.”

Encana’s projected 2018 capital program is set at $1.8-1.9 billion, which it plans to fully fund with cash flow. About 70% of the program is to focus on the Permian and Montney, with the core four slated to contribute more than 95% of total output.