Encana Corp.’s U.S. subsidiary on Thursday said it would sell its entire 51,000 net-acre portfolio in Colorado’s Denver-Julesburg (DJ) Basin for $900 million to improve its balance sheet. 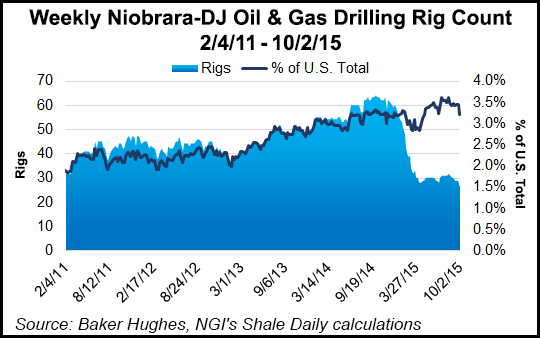 “As we advance our strategy we continue to focus our portfolio and capital on our four most strategic assets, the Permian, Eagle Ford, Duvernay and Montney,” said Encana CEO Doug Suttles. “Our efforts to transform our portfolio, improve efficiency and grow margins are increasing returns and strengthening our balance sheet, positioning Encana for success throughout the commodity cycle. The new entity is acquiring a quality asset along with a highly talented team.”

The DJ, once one of Encana’s top performers, has seen its importance to the portfolio diminish as more investment dollars have been moved to four onshore regions only: the Permian Basin, Eagle Ford Shale and British Columbia’s Duvernay and Montney fields (see Shale Daily, Sept. 24, 2014). In May Encana had only one rig working in DJ (see Shale Daily, May 13).

During the first half of this year, Encana’s DJ Basin assets produced an average of 52 MMcf/d of natural gas and 14,800 b/d of crude oil and natural gas liquids. Based on the company’s development plan at year-end 2014, estimated proved reserves were 96.8 million boe, more than 40% natural gas.

Encana long has been one of the DJ Basin’s top producers. In August it reached agreement with the town of Erie in the DJ, one of the company’s original assets from its inception in 2002, about how drilling sites should be operated (see Shale Daily, Aug. 28).

The sale, subject to regulatory approvals, is expected to close before the end of the year. In August it agreed to a $850 million deal for its Haynesville Shale leasehold, casting off what also was once one of the operator’s onshore jewels (see Shale Daily, Aug. 25). Encana’s cash proceeds from divestitures to date this year total about $2.7 billion. By the end of the year, it expects to have reduced its net debt by by $3 billion.

Great Western operates more than 400 wells in the DJ Basin and is one of the top producers in the Wattenberg Field. The producer already has made two purchases in Colorado this year. In June it bought 6,000 acres in Wattenberg that were expected to allow it to drill up to 100 horizontal wells in the Niobrara and Codell formations. In January it acquired 816 net leasehold acres and 14 producing wells in the Wattenberg.

Following the June purchase, Great Western CEO Rich Frommer said management continued “to see great value in the DJ Basin and remain committed to Northern Colorado and increasing our holdings there. We expect additional acquisition activity in the near-term future.”