Encana Corp. on Wednesday doubled its current oil production in one swift move by agreeing to pay $3.1 billion for a slice of the Eagle Ford Shale in South Texas. 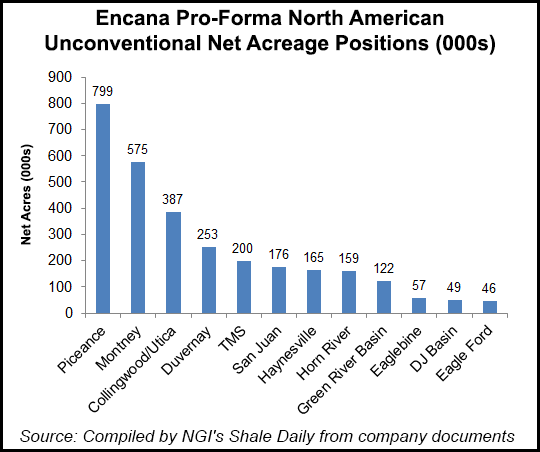 “Gaining a position in a world-class, oil-rich resource play like the Eagle Ford accelerates the transition of our portfolio and underscores our investment focus on high margin assets,” Suttles told analysts. The decision to gain entry into the Eagle Ford is similar to one chosen last year by former gas heavyweight Devon Energy Corp. (see Shale Daily, Nov. 20, 2013).

In the first three months of this year, the acreage being purchased by Encana produced close to 40,000 b/d of oil, 6,000 b/d of liquids and 44 MMcf/d of natural gas, which generated operating cash flow of $327 million.

The transaction appeared to send the Canadian industry a message that its top natural gas producer remains unconvinced that the partial recovery brought on by the severe 2013-2014 heating season marks the start of a return to high gas prices. In Canada, the exceptionally cold winter has fueled a school of thought on stock exchanges that a long-range, lasting gas price revival has begun and the risk of a return to 2012-2013 lows is dropping or disappearing.

The deal is to be funded mostly with cash and using proceeds from Encana’s recent big sales, which include the Jonah gas field and some gassy East Texas properties (see Shale Daily, April 29; March 31). The sales were included as part of the Calgary operator’s strategy to focus on only high-margin, liquids-rich properties.

“With this transaction…we’re replacing natural gas production with high margin oil and liquids production,” Suttles said. The transaction, set to close by the end of June, would contribute to the bottom line this year by being free cash flow positive.

“As we look at the potential for additional value creation in this property, clearly, we believe the focus we have across our five core growth [areas depends] on continuously improving the cost efficiency,” which “would be utmost in our plan,” Suttles told analysts. “We also believe year-on-year improvements and things like well performance will also be critical. We want to learn from the…offset operators who are exploring downspacing, in fact all the way to 20 acres, and using things like how we land the wells and how we design the completions in the fracture jobs to maximize the recoveries from this acreage.”

Encana’s repositioning has never been about cutting the focus to “only” a few oily plays, but rather to develop the best holdings with the best margins. The Eagle Ford meets every metric, he said. But that doesn’t mean Encana plans to acquire more positions in other plays anytime soon.

“We don’t want to get back to where we were in the mid to upper 20s, and I still see this as part of that. And in addition, we’ll continue to monitor the market and whether that’s to build onto our existing positions or organically…Actually, I think as we’ve demonstrated that here quickly when the right opportunities are available.”

“Because Encana’s 2014 pro forma production will increase about 8% from its pre-acquisition estimate, the incremental production does not materially affect our view of the company’s business risk profile.

The Eagle Ford is a natural extension of the refocus, said Suttles.

“This transaction directly aligns with Encana’s strategy by adding a sixth core growth asset in an established oil production basin that provides immediate impact on company-wide returns. The Eagle Ford is recognized as being among the most prolific and profitable resource plays in North America.”

Through the second half of this year, Encana plans to ramp up activity from three operated rigs to at least four, said the CEO. Freeport-McMoRan at one time was running eight rigs in the play.

“In addition to the near term growth potential of this asset, we believe there are many opportunities to enhance the value of this world class position by applying our proven resource play expertise,” said Suttles. “Overall, this acquisition fully aligns with our strategy announced last November; it will significantly boost our oil and liquids output, improve our ability to generate cash flow and enhance our portfolio of world class resource plays.”

“The transaction is part of our plan to monetize approximately $4 billion in energy assets to provide meaningful proceeds for debt repayment while enabling us to refocus our asset base and capital allocation on our strategic growth areas in the Gulf of Mexico,” said Freeport-McMoRan’s James Flores, who runs the oil and gas arm.

Motley Fool’s Matt DiLallo noted that Freeport-McMoRan had been using the Eagle Ford asset for cash flow, unlike most of the producers that are using it for growth. “With so much more promise in the Gulf of Mexico, Freeport-McMoRan can cash in on its Eagle Ford Shale success and use that cash to pay down debt, while it focuses its oil and gas cash flow to grow its operations in the Gulf. Because of that the asset really is better off in other hands.”

Standard & Poor’s Ratings Services said the transaction doesn’t affect Encana’s ratings and outlook, and should in fact improve it with the increased liquids-focused production.