In long expected news, Encana Corp. on Monday agreed to sell its stakes in Wyoming’s Jonah Field to TPG Capital for $1.8 billion. 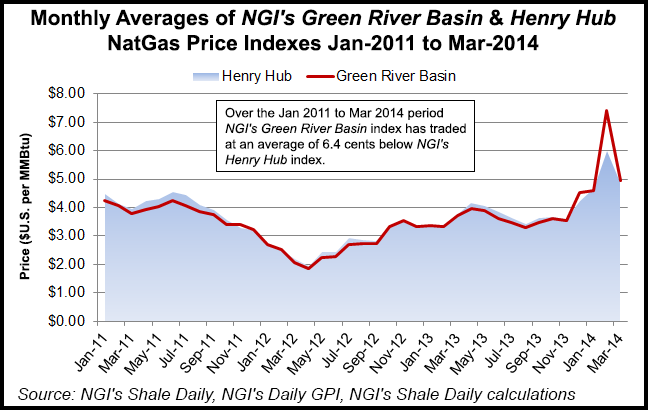 The Green River Basin play in Sublette County, where Jonah is located, was one of the largest natural gas discoveries in the 1990s.

Encana Oil & Gas (USA) Inc. had been rumored to be marketing Jonah for a couple of weeks (see Shale Daily, March 17).

In total, Encana has a productive area in Jonah of 24,000 acres and more than 1,500 active wells. Estimated year-end 2013 proved reserves totaled 1.493 Bcfe. The transaction with TPG also includes more than 100,000 undeveloped acres adjacent to Jonah known as the Normally Pressured Lance (NPL) area.

“This transaction is consistent with our strategy,” CEO Doug Suttles said. “With the divestment of Jonah, we are unlocking value from a mature, high-quality asset and allowing our teams to focus on our five core growth areas and continue with execution of our new strategy.”

Encana, which has been selling off some of its gassy properties to focus on liquids onshore plays, whittled its exploration list to only five plays this year: Montney Formation, Duvernay Shale, Tuscaloosa Marine Shale, Denver-Julesberg Basin and San Juan Basin (see Shale Daily,Feb. 13).

The strategy makeover, launched in November, took the company from funding about 30 onshore targets, mostly gas-weighted. A bundle of other onshore assets is on the market that may include a stake in the Deep Panuke gas platform offshore Nova Scotia.

“The Jonah Field is a world-class, low-risk resource with long reserve life and future drilling opportunities that will be a strong platform to continue to grow a portfolio of cash flow-producing assets,” said CEO Tom Hart of the new oil and gas platform formed by TPG to pursue Jonah.

TPG plans to retain all of the employees now working in connection with Jonah. It also plans to continue to invest in the field and adjacent acreage. The sale is set to close by the end of June with an effective date of Dec. 1, 2013.

“We look forward to working with the talented Encana team that has made Jonah a successful operation for many years,” said Craig Manaugh, COO of the new TPG platform. He said TPG also would maintain the field office near Pinedale, WY, and add a Denver office.

Since the beginning of 2011, NGI‘s Green River Basin index has traded at an average of 6.4 cents below NGI’s Henry Hub index.

In connection with the sale to TPG, Northwest Natural Gas Co. executed an amendment to its carry and earning agreement with Encana Oil & Gas (USA) Inc. to facilitate the Jonah sale. The agreement ends NW Natural’s drilling in the field, but maintains its ownership interest in both existing production as well as some future locations.

NW Natural entered into agreements with Encana in 2011 to develop gas reserves to provide long-term price protection for Oregon utility customers (see Daily GPI, April 21, 2011). Under the agreement, NW Natural was expected to invest $45-55 million a year for five years, for a cumulative total investment of about $250 million. Revenues from the sale of gas produced under the agreement is credited to utility cost of gas and included as part of the annual Oregon purchased gas adjustment filing, which allows NW Natural to recover its gas reserve costs, plus a return on the net investment, through customer rates.

This year NW Natural has invested $15 million, or a cumulative total investment of $176 million in the joint venture, with reserves expected to provide a price hedge on about 9% of the utility gas purchase requirements for the current year.

“We continue to reap the long-term advantages of low natural gas prices through our investment in the Jonah Field,” said NW Natural CEO Gregg Kantor. “Our investment is expected to continue to provide stable prices for a portion of our utility gas supply for years to come.”

The amendment increases NW Natural’s interests in sections of the Jonah Field. The company also would continue to have additional drilling rights under the joint operating agreement with TPG, creating an opportunity to develop future reserves.

NW Natural estimated that it could provide about 25 Bcf of additional gas that could be developed for its customers in the future. The amendment took effect March 7.

“We believe locking in a portion of our supply with lower cost gas is the right thing to pursue on behalf of our customers,” said Kantor. “Encana was a great company to partner with on this innovative agreement, and we look forward to working with the new owner and the [Oregon regulators] to explore the potential benefits of further well development at Jonah.”