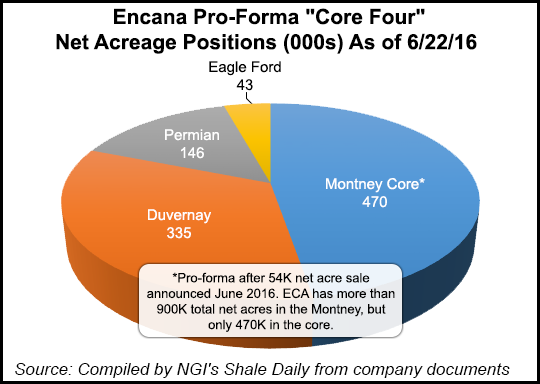 The sale includes 54,200 net acres of land and associated infrastructure in northwestern Alberta (AB). Encana has an estimated 525,000 net acres in the Montney, and with the sale, it would have an estimated 470,000 net acres, including 9,000 drilling locations with two-thirds of the wells in the condensate-rich portion of the play.

In addition, by transferring current and future obligations, Encana would reduce midstream and downstream commitments by more than $78 million on an undiscounted basis. No drilling or completions capital has been spent or was planned for the area in 2016.

“We are tightening our portfolio and sharpening our focus in the Montney, where we expect to grow liquids production to 50,000 b/d by the end of 2018,” said CEO Doug Suttles. “This transaction further strengthens our balance sheet and gives us greater financial flexibility as we look to the future.”

Canada’s top natural gas producer has been shoring up its liquidity by selling off acreage that it no longer considers key to its growth. Capital spending was curtailed by 55% from 2015 to $900 million and the workforce has been reduced to about half the size it was in 2013 (see Shale Daily, Feb. 24).

The Montney still figures heavily in the go-forward plans. The formation straddles northwestern AB and northeastern British Columbia, and even with the sale, the Montney would remain Encana’s largest onshore play, with an estimated 9,000 well locations and two-thirds of those wells in the condensate-rich area.

Encana actually has the rights to more than 900,000 acres total in the Montney, but the intention is to focus on the core acreage, spokesman Jay Averill told NGI’s Shale Daily.

The Montney, which Encana considers one of the top five gas fields in the world, is expected to be called upon to increasingly meet North America’s gas demand, executives said in May (see Shale Daily, May 18; May 17). Encana’s Montney output is on course to average 7 Bcf/d by 2020.

According to Jefferies analyst Jonathan D. Wolff, of the Gordondale acreage being sold, 79% already has been developed, and as Encana noted, it was not planning to spend capital in the play this year.

“At $3,000/flowing MMcfe/d, this gives little value ($3,000 per acre) to the 21% of the acreage (11,300 net acres) that is undeveloped,” Wolff said. “However, we believe the production likely has very low margin and high operating costs/transport costs, so $3,000 per flowing may be an aggressive valuation metric.”

Encana’s “core four” in North America also include Canada’s Duvernay formation in Canada with an estimated 1,000 well locations and more than 335,000 net acres in Simonette (97,000), Willesden Green (200,000) and Edson/Pinto (38,000). Peripheral land positions outside of those blocks also are retained, Averill said.

In addition, Encana has 5,000 well locations in the Permian Basin and an estimated 600 in the Eagle Ford Shale.

The transaction with Birchcliff is expected to close this summer.

Birchcliff, like Encana, is headquartered in Calgary. Its operations are concentrated within one core area, the Peace River Arch of the Montney, and its production last year was 92% weighted to gas. The 2015 drilling program was focused on the gassy Montney/Doig play and Charlie Lake light oil play, with a total of 32 wells drilled. Production from the Montney/Doig play in 2015 averaged 32,890 boe/d, with the operating netback at C$13.80/boe. Average operating costs in the play were C$3.22/boe.