Encana Corp. on Thursday struck a C$2.18 billion joint venture (JV) agreement to explore and develop close to half a million acres of its leasehold in the Duvernay Shale with a subsidiary of PetroChina International Ltd. 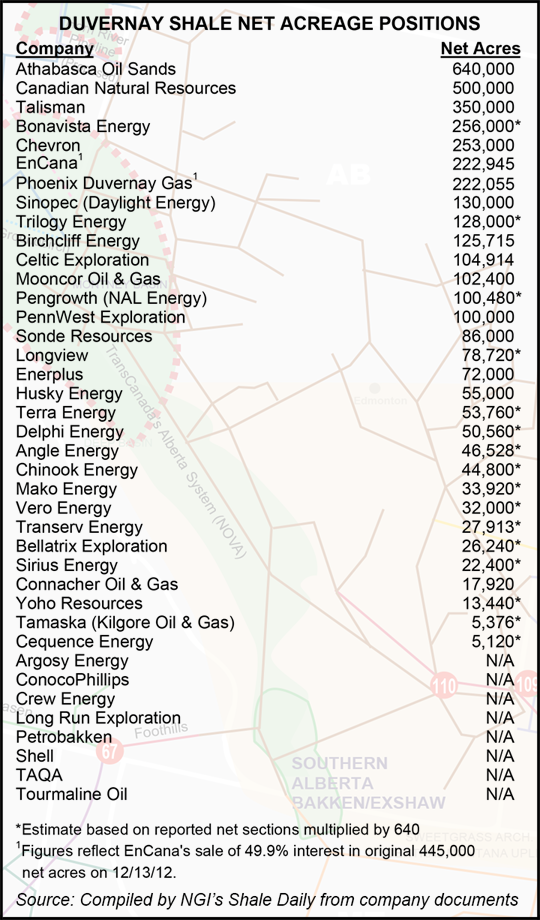 Under the agreement, Phoenix Duvernay Gas would gain a noncontrolling 49.9% stake in Encana’s 445,000 acres in the Duvernay. Encana is to be paid $1.18 billion when the transaction closes and another C$1 billion over the next four years in the form of a drilling carry for half of Encana’s share of development capital. Over the carrying period, the JV partners plan to invest C$4 billion in new drilling, completion and processing facilities.

Encana, which would remain the operator and hold the majority stake, estimates that the Duvernay JV lands contain about 9 billion boe initially in place.

“Phoenix’s investment demonstrates the tremendous value that Encana has created in this early life liquids-rich play, and enables us to accelerate the pace at which the full production potential of our Duvernay lands can be achieved,” said Encana CEO Randy Eresman. “A transaction of this magnitude keeps us on track to create a more diversified commodity portfolio and maintain our balance sheet strength.”

Encana so far has drilled nine wells into the Duvernay, has five producing wells and currently has two rigs actively drilling more prospects. With the JV, the Calgary producer expects to more than double its planned pace of development in the play beginning early next year.

“The Duvernay project will combine Phoenix’s integrated upstream and downstream capabilities and financial resources with Encana’s proven resource play hub expertise,” said Phoenix CEO Zhiming Li. “This joint venture will build a foundation for the successful development of the Duvernay play and help to diversify our business portfolio. Encana is our ideal long term partner for the development of our future natural gas business.”

The Duvernay has perhaps become a more credible development in the eyes of investors after ExxonMobil Corp. in October agreed to pay US$3.1 billion for Celtic Exploration Ltd., which has holdings in the Montney, Duvernay and other Canadian formations (see Shale Daily, Oct. 18). ExxonMobil plans to develop the Celtic leaseholds with its majority owned Canadian company Imperial Petroleum Ltd.

“Having entered into several JV transactions in 2012, these types of arrangements have become an important part of Encana’s business model,” Encana officials said. “Joint ventures help the company to achieve a highly efficient deployment of capital throughout its vast exploration and development asset base as Encana transitions to a more diversified portfolio of commodities.

“These relationships have the potential to increase natural gas demand as a number of Encana’s partners are actively exploring opportunities to export liquefied natural gas, while some are industrial consumers looking to transition to natural gas as fuel for their operations. An example is a recent agreement with Nucor Energy Holdings, which is designed to support Nucor’s increased use of natural gas for its facilities, such as its direct reduced iron facility currently under construction in Convent, LA.”

Nucor in November agreed to take a half-stake in some of Encana’s U.S. natural gas wells to guard against an expected increase in U.S. gas prices. The agreement builds on an earlier and smaller onshore gas drilling agreement with Encana that was clinched in 2010 by increasing the number of gas wells. It also offers the Charlotte, NC-based steel manufacturer more protection against volatile gas prices, which are among its biggest operational costs.

Including the proceeds from the Phoenix transaction, Encana expects to end the year with cash balances of more than US$3 billion, which is ahead of its a June target of US$2.5 billion. In addition, “confirmed” carry capital committed to Encana from joint ventures and other third party agreements for 2013 is now about US$750 million, and covers about half of Encana’s projected costs in those areas, it said.

“Our enhanced risk management position combined with our significant expected cash balance for the end of the year puts us in a solid position to execute on our plans for 2013,” said Eresman. “We expect these joint venture arrangements will help us achieve higher capital efficiencies, which will enable us to reduce the amount of capital that we initially projected to spend next year.”