North American onshore explorer Encana Corp. smashed oil and condensate production records in 2Q2019, with output from the Anadarko and Permian basins exceeding expectations even as costs came down. 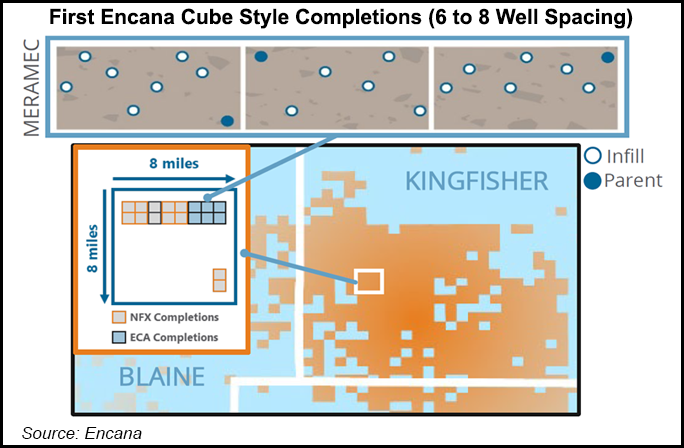 Total production reached 592,000 boe/d, a record, up 11% year/year on a proforma basis, as Encana completed its takeover of Oklahoma-focused Newfield Exploration Co. to build its Midcontinent arsenal.

“Our business is growing and generating free cash flow, and we are firmly on track to deliver on our capital investment outlook for this year. Our free cash flow is significant and will be used to fund the share buyback and strengthen our balance sheet.”

Output from the Anadarko, propelled by Newfield’s volumes, jumped 18,000 boe/d to a record 163,000 boe/d. Well costs in the Sooner Trend of the Anadarko Basin, mostly in Canadian and Kingfisher counties, exceeded the $1 million savings target by 40%.

Recent growth in the Anadarko was attributed to a 31% sequential gain in STACK oil output, with oil and condensate now accounting for around 37% of volumes.

“Importantly, Encana continued to enhance returns in the STACK through additional reductions in completed well costs,” management noted. “Since closing the acquisition of Newfield in mid-February, well costs have been reduced by $1.4 million to $6.5 million,” versus Encana’s 2018 average of $7.9 million.

The Permian also overperformed at a record average of 104,000 boe/d, 84% weighted to liquids. Encana touted a four-rig program focused on cube development and said a recent 14-well pad in Martin County, TX, recently ramped up and was averaging 14,900 b/d after 90 days.

Meanwhile, cycle times in the Montney were reduced by more than 10% sequentially, averaging less than 70 days. “Wells on production in the year are outperforming the oil and condensate type curve by approximately 25%,” management said.

Capital expenditures (capex) totaled $750 million in the quarter, in line with expectations to front-load spending in the first half of the year. Total costs decreased to $12.78/boe with a cash flow margin of $16.27/boe.