Encana Corp. on Monday placed another transformative piece into its puzzle to move from the natural gas world into oil, agreeing to pay a total of $7.1 billion for Permian Basin operator Athlon Energy Inc., giving it 140,000 net acres in the heart of the oily Midland sub-basin. 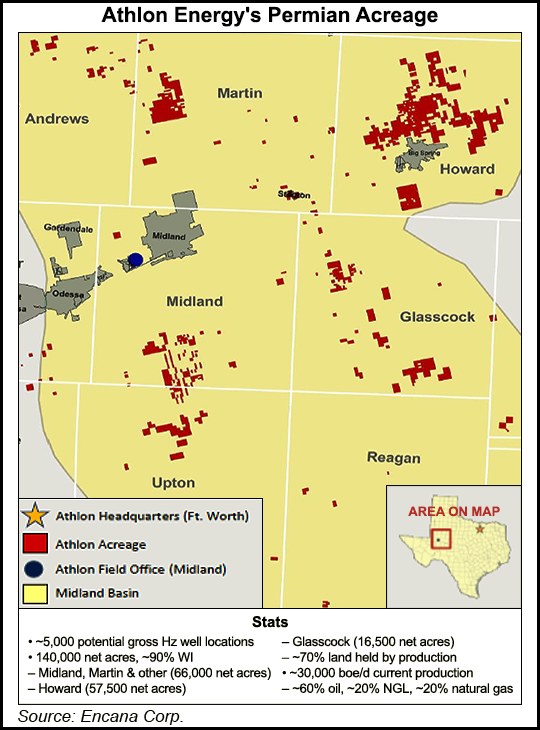 Under terms of the transaction, Athlon would receive $5.93 billion in cash, or about $58.50/share, and Encana would assume $1.15 billion in debt. Athlon’s board unanimously has recommended shareholders accept the offer, which would give Encana its seventh focus area in North America.

“This transformative acquisition further accelerates our strategy and provides us with a prime position in what is widely acknowledged as one of North America’s top oil plays,” CEO Doug Suttles said during an early morning conference call Monday.

“The Athlon team has built an exceptional asset with massive running room that includes greater than 10 years of drilling inventory with up to 11 potential productive horizons of high-margin liquids.”

Athlon, funded in part with private equity funds from Apollo Global Management LLC, has current estimated production of 30,000 boe/d, 80% weighted to liquids. At the end of June, the Fort Worth, TX-based operator had a total of 1,121 vertical wells and 17 horizontals. The operator had 173 million boe of proved reserves at the end of 2013.

It’s the Texas two-step for Calgary-based Encana, which only four months ago agreed to pay Freeport McMoRan Inc. $3.1 billion for a slice of world-class Eagle Ford Shale pie in South Texas (see Shale Daily, May 7). The Eagle Ford and Permian Basin acquisitions, and two legacy Canadian holdings — the Montney and Duvernay formations — “give us the two leading oil plays in the United States and the two leading oil plays in Canada,” Suttles said. In addition, Encana continues to have some of the biggest natural gas holdings in North America, he noted.

In a little more than a year, Encana has been made over in Suttles’ vision. He joined the top-heavy natural gas producer in mid-2013 as it was struggling with a plunge in commodity prices and a world-class enterprise that stretched across North America (see Shale Daily, June 12, 2013). The former BP plc COO revamped the strategy, but not the core belief: to focus on unconventionals in the onshore. Once prized assets were sold, executives were fired and spending was cut. From more than 30 operating areas, Encana’s focus was trimmed to five. The Eagle Ford made it six. The Permian gives it seven.

“With a commitment to excellence and an unwavering focus on results, the Athlon team has established a track record of acquiring high-quality assets, applying extensive technical expertise as a top-tier operator and creating tremendous value for our shareholders,” Athlon CEO Bob Reeves said. “Through tireless dedication and hard work, our team has built a high rate-of-return oil manufacturing process in the heart of the world-class Midland Basin. With Encana’s exceptional resources and the collective expertise of both teams, the next phase will accelerate development and ultimately realize the full potential of the deep inventory of premier projects.”

The transaction should add about 30,000 boe/d, based on Athlon’s current estimated output, including recent acquisitions. Most of the drilling to date has been vertical, but that’s changing, and Encana engineers estimate the potential for around 5,000 horizontal well locations with potential recoverable resource of 3 billion boe.

Next year, at least $1 billion of capital is set to be invested in the Permian play, with at least seven horizontal rigs planned for the year — up from three in 2014. Encana also plans to run up to eight vertical rigs.

The Permian is set to play an important part within Encana’s growth portfolio, contributing significantly to company-wide projected total liquids production of around 250,000 b/d by 2017, Suttles said.

“During our strategic review last year, we carefully studied North America’s premier basins and identified the massive horizontal, multi-zone, development potential in the Permian,” Suttles said. “Our strong balance sheet gave us the ability to act and capture this highly value-accretive opportunity. It is early days in the horizontal development of the Permian play and we see tremendous opportunity to enhance and accelerate value by applying our proven resource play model.”

With the Athlon transaction, Encana now expects to achieve its initial 2017 target to hit 75% of operating cash flow from liquids production in 2015. “We’re delivering on the portfolio promises we made for 2017 today,” Suttles said. “We believe this acquisition, when combined with other recent portfolio changes, is highly accretive to our long-term cash flow per share projections and our goal of sustainably growing shareholder value. Our portfolio now aligns with our vision of being a leading North American resource play company. Our growth areas now include the top two resource plays in Canada, the Montney and Duvernay, and the top two resource plays in the United States, the Eagle Ford and the Permian.”

The Permian acquisition should become free cash flow position by 2016, he said. Athlon’s portfolio provides “investment opportunities for 10-plus years,” with premium netback production,” said Suttles. Encana’s lower margin gas production quickly is being replaced with higher margin oil and natural gas liquids, the CEO noted. “We have an opportunity to enhance value by applying Encana’s operational and proven resource play hub expertise,” a concept that the company innovated through multi-well pads.

The transaction already has been approved unanimously by the companies’ boards. Athlon’s senior management, as well as funds affiliated with Apollo, agreed to tender their respective shares, which on a combined basis represents 35.8% of Athlon shares. Athlon formed a partnership with Apollo affiliates in 2010 to acquire onshore acreage, mostly focused in the Permian. If all goes to plan and regulators approve, the transaction could be completed by the end of the year.

The takeover taps a treasure chest that Encana has built by selling off natural gas properties and rare, privately owned western Canadian mineral rights which were heritage land grants dating back to 1880s construction of the Canadian Pacific Railway (CPR). Encana acquired the rights from its birth in a 2002 merger between Alberta Energy Co. and the CPR’s oil and gas arm, PanCanadian Energy (see Daily GPI, July 26, 2002). Encana recently converted the old rights into PrairieSky Royalty Ltd. and sold the entire package to investors (see Shale Daily, May 29).

The huge transaction caught some analysts by surprise. Wells Fargo Securities team said it knew that Encana was looking for more onshore properties, but “most of the talk circled around Niobrara/Eagle Ford…From the Street perspective, it continues to validate the potential in the Permian, and in our view, is likely to push those names higher…”

“Encana is looking past the short term,” said Rezvan and Hobbs. “Sentiment toward the Permian Basin-focused equities has wavered in recent months. A glut of oil production growth is weighing on regional pricing, although the situation should resolve itself with 725,000 b/d of additional pipeline takeaway coming by early ’15. The heavy rig ramp in the basin has created some service cost inflation. And the exploratory momentum in the play has waned, with operators and investors generally conceding there may not be ‘zonal upside’ from the current four-five delineated horizons currently being drilled for oil.

“But with that said, the Permian Basin does offer a compelling stacked pay opportunity for well-capitalized operators to add many years of generally derisked oil-rich inventory that should provided compelling well-level investment rate of return in a $80.00/bbl-plus West Texas Intermediate environment.”

Encana also has bigger things planned for Midland, Haas noted. Athlon was set to increase its rig count to six by the second quarter of 2015, but “Encana now sees pushing that number to seven rigs by year-end 2015. The capital budget for 2015 is set to be $1 billion, up from Athlon’s 2014 budget of $700 million.”