Encana Corp. late Monday launched a bid that would enable it to double its Permian Basin well count in 2017 with an equity offer to raise more than $1 billion. 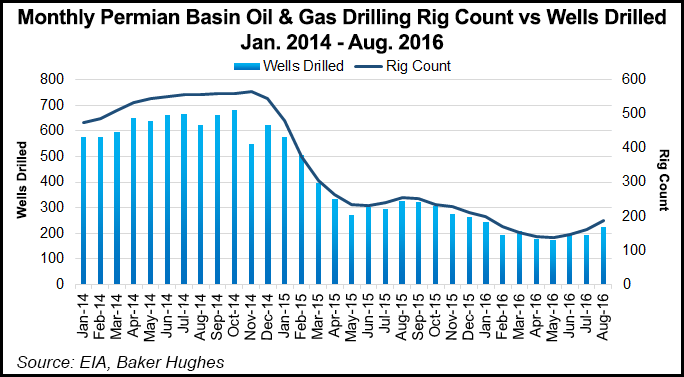 The Calgary-based independent plans to sell 107 million shares priced at $9.35/share through underwriters led by Credit Suisse Group AG and JPMorgan Chase & Co. An additional 16.05 million shares also may be purchased as part of the deal. Half of the net proceeds would be used to fund part of the 2017 capital program, with the remaining funds used to repay debt.

Most of next year’s capital program “is expected to be allocated to growing Encana’s Permian production through increasing the number of rigs in the play, which is expected to result in approximately two times as many Permian wells onstream in 2017 as compared to 2016,” management said.

Encana earlier was guiding for 65 horizontals to be drilled in the Midland sub-basin this year, which means it may be looking to complete 130 wells in 2017. It earlier estimated it had about 5,000 drilling locations across the West Texas play.

Allocating the proceeds could vary, depending on changes in commodity prices and “increased capital efficiency.” The offering is scheduled to close on Friday (Sept. 23).

Encana gained entry into West Texas two years ago with its $7.1 billion purchase of Athlon Energy Inc. (see Shale Daily, Sept. 29, 2014). It now has close to 150,000 net acres, nearly all in the Midland region, spread across Howard, Martin, Midland, Glasscock and Andrews counties.

During the second quarter, Encana completed its first 14-well pad in the Midland, which peaked at 12,000 boe/d and was producing more than 10,000 boe/d gross (see Shale Daily, July 21). In addition, the Permian assets delivered a 10% sequential quarterly reduction in average drilling and completion costs, 31% lower than the full-year 2015 average.

NGI recently took a closer look at who’s doing what, where and for how much in its special report Permian: ”The Mother Lode’ — Texas Play Heats Up as Industry Looks to Get Back to Work.

More details on Encana’s 2017 plans are expected to be disclosed during an analyst presentation scheduled for Oct. 5.

“The deal was a surprise to us despite the recent finalization of its shelf prospectus in late-August,” analyst Jonathan D. Wolff said. However, Encana was one of the few exploration and production companies that had not sold equity this year, relying instead on asset sales. During 2Q2016, Encana sold its Denver-Julesburg Basin properties in Colorado for $900 million (see Shale Daily, Dec. 24, 2015). In June Encana agreed to sell its Gordondale properties within the Montney for $488 million, but it still has an estimated 470,000 net acres in the formation (see Shale Daily, June 22).

Investors now may push Encana “to further monetize its Canadian Montney land holdings or consider a strategic realignment,” Wolff said. However, Encana made a case earlier this year that the gassy play will figure big in growing North American gas demand — and compete price-wise with the Marcellus Shale (see Shale Daily, May 18).

Encana had close to $1.5 billion outstanding on its credit facilities at the end of June. When combined with an estimated $1 billion-plus of asset sales, the new equity offering could eliminate the outstanding balance, according to Jefferies.