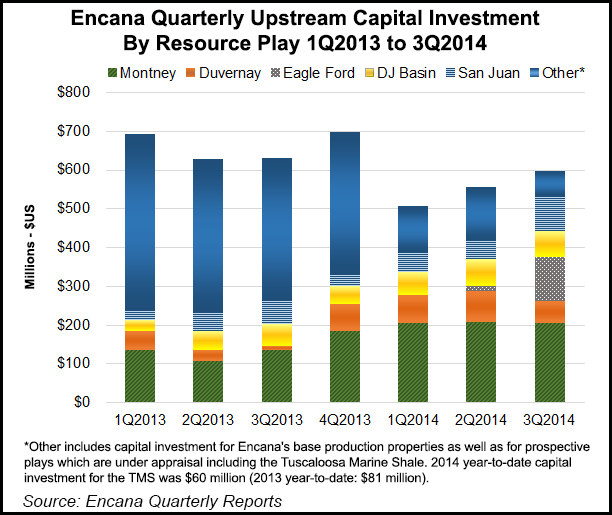 Encana over the past year sold off 11 assets within its original portfolio of 28. It also extended its operations in Texas through key deals in the Eagle Ford Shale and Permian Basin.

The portfolio “feels to be in a great place, with a great mix of oil and natural gas opportunities,” said the CEO said during a conference call to discuss quarterly results. “It’s interesting right now,” he said, referring to the decline in oil prices and their impact on Encana’s operations.

“A $5.00 swing in the oil price is the same as a 50-cent change in the gas price. Even as oil has weakened, gas has strengthened.”

Asked about how volatile commodity prices might impact operations into 2015, Suttles said, “Who knows what the world’s going to be like? It’s quite the adventure…” However, since Encana began repositioning its portfolio, “we expect to see fairly high capital because our cash flow has grown substantially,” regardless of commodity prices.

Encana’s quarterly results highlight “the tremendous momentum we have built executing our strategy, and we are now a full two years ahead of the targets we originally set for 2017. The steps we have taken to transform our portfolio and drive cost efficiencies have delivered an over 50% increase in upstream operating cash flow against an 8% decline in overall production, compared to the same period in 2013.”

Natural gas remains a big part of the portfolio, but reining back on production and selling off lower margin properties led to a 19% decline in output year/year to 2.2 Bcf/d. Liquids-rich production, meanwhile, jumped 79% to 104,000 b/d. One notable addition to the portfolio from a year ago is an Eagle Ford Shale property, which Encana secured in May (see Shale Daily, May 7). The Eagle Ford alone accounted for 37,600 b/d of liquids production.

By Thursday, Encana also expects to have completed its purchase of Athlon Energy Inc., which will give it a big position in the Permian Basin and ready it for sustained liquids growth, said Suttles. Encana in September agreed to pay more than $7 billion for the Fort Worth, TX-based operator (see Shale Daily,Sept. 29).

The Athlon transaction by itself would put Encana on track to realize an expected 75% increase in operating cash flow from liquids output in 2015, a prospect that had been expected would take two years to do, the CEO noted.

Encana remains a gas-weighted operator; it’s still the biggest gas producer in Canada and one of the largest in the United States. However, Encana sold some of its lower margin gas assets this year and reinvested the proceeds into higher-margin liquids opportunities. Total netback for the divested gas-rich assets was estimated at $20/boe, while the expected netback for the assets acquired was around $55/boe.

“We’ve achieved significant capital and operational cost improvements in each of our growth areas, resulting in improved capital efficiency and margin growth,” said Suttles. “We hit the ground running with a seamless transition into the Eagle Ford…We are very confident that we will replicate our Eagle Ford success in the Permian…”

Capital expenditure plans for 2015 won’t be firmed for another month or so, but “we see the budget growing substantially even in an $80/bbl world,” said Suttles. “We expect our activity to grow, with predominance in our top four plays: Montney, Duvernay, Eagle Ford and Permian.”

Reducing its operational focus hasn’t been management’s only concern. Like other exploration companies, Encana has been working on operational efficiencies, and overall operating costs are about 13% lower year/year through the first nine months of 2014.

One full quarter into working the Eagle Ford assets, Encana already has reduced drilling costs by 25% and completion costs by 13%, said operations chief Mike McAllister. Current production is about 45,000 boe/d, with liquids comprising 85%. Production from the play on an annualized basis is expected to average about 23,000 boe/d and contribute $200-250 million of free cash flow in 2014.

Four rigs are running in the South Texas play today, with a fifth scheduled to arrive in mid-December. Encana expects to have invested $260-$280 million this year to drill 34 net wells. Also in October, Encana executed a land swap with EOG Resources Inc. that improved its working interest and allowed it to pace its development.

High-intensity completions are the name of the game in the Montney’s Cutbank Ridge. Eight wells brought online in the quarter had average initial production (IP) rates of 12-14 MMcf/d. Sixty-five net wells had been drilled as of Sept. 30, and there were four rigs running in the play.

Also in the Montney, Encana in September commissioned its Water Resource Hub, which is expected to both reduce overall development costs and the use of surface water. By drawing on otherwise unusable saline water, the centralized facility is projected to meet up to 75% of operational water requirements over the next five years and result in conserving about 16 million barrels of surface water.

Duvernay drilling costs also were a priority, and they fell by 17% from 2Q2014 using Encana’s manufacturing hub approach. A three-well hub at a total cost of $3.6 million represented its lowest cost to date in the play, reflecting a 49% decline in 2013 average costs. Year-to-date Encana has drilled 19 net wells and has five rigs now running.

Developing long-term takeaway capacity also remains key for the Duvernay, McAllister said. Encana commissioned the 15-31 compressor plant in the third quarter, which is expected to increase processing capacity to 55 MMcf/d of gas and 10,000 b/d of condensate.

In the San Juan Basin, production this year is expected to reach 9,500 boe/d, an increase of 150% from 2013. Compared with 2013, drilling costs already have fallen by 11%, while completion costs are down 15%. Well performance “continues to meet or exceed expectations,: with IP rates of 400-500 b/d. Three rigs currently are running in the play and 24 net wells have been drilled this year.

DJ Basin drilling cycle times are averaging three days below Encana’s targets, with section length laterals taking under 10 days spud-to-rig release, and one and one-half section laterals around 13 days spud-to-rig release. Eight 10,000-feet lateral wells were drilled in the DJ during the quarter, with one pace-setting 10,000-foot well in 17 days. Year-to-date well costs are averaging $4.5-5 million in the DJ. Six rigs are in operation, with 49 wells year-to-date.

Perhaps the only slowdown has been in the TMS, an emerging play with higher operational costs, a problem also cited by Halcon Resources Inc., which has slowed its drilling program (see related story).

Still, Encana, like Halcon is encouraged by early results. Encana’s three most recent wells reached 30-day IPs of more than 1,100 b/d. It has drilled 10 net wells to date and plans to run two rigs through the rest of the year. Going forward, plans remain iffy. TMS has to be able to compete for capital, but there’s time to make a decision about whether to keep it or put it on the sales block.