Encana Corp. has paused a well completion operation in the heart of Oklahoma’s stacked oil and gas formations following two earthquakes that measured 3.2- and 3.9-magnitude. 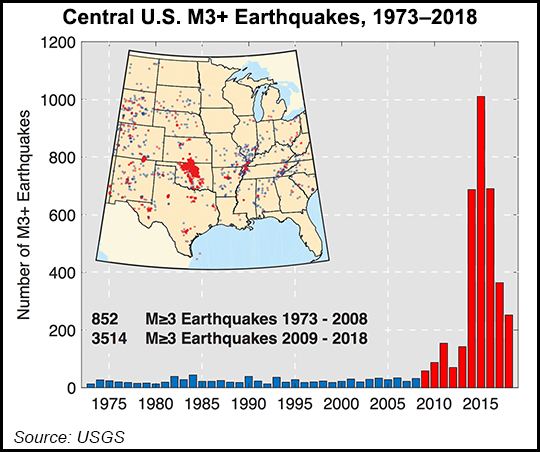 Operations were underway in Kingfisher County, part of the STACK, or the Sooner Trend of the Anadarko Basin, mostly in Canadian and Kingfisher counties, according to the Oklahoma Corporation Commission (OCC).

The operation was on an oil well on a multi-well pad, Encana spokesperson Cindy Hassler told NGI’s Shale Daily.

“Encana immediately shut down operations on our wellsite after the occurrence of the first seismic event” on Wednesday evening, Hassler said.

Encana, which gained most of its broad Oklahoma position with the $7.7 billion takeover of Newfield Exploration Co., informed the Induced Seismicity Department (ISD) of the OCC that it would halt the completion.

“The wellsite will be shut down until we’ve had a chance to do a thorough technical review,” Hassler said. “We have had significant experience with this type of event, and we have a plan in place and will work with the OCC on its safe implementation.

“The operating procedures that we follow, which are required by the OCC, help us manage the occurrence and magnitude of induced seismicity. In addition, these procedures help us ensure the safety of our employees onsite and also those in the surrounding community.”

According to the OCC, the Calgary-based producer had paused operations for 12 hours after the first event. While operations were paused, the second, larger event occurred.

The minimum level at which the operator must take action is a 2.0-magnitude earthquake under OCC guidelines. Tremors in general can be felt at about 2.5-magnitude, and operators are required to pause operations for six hours when a 2.5-magnitude-plus tremor occurs.

A recent study funded by the U.S. Geological Survey, which focused on areas of the Anadarko Basin in Oklahoma, found that differences in density between underground water and wastewater from drilling injected into the ground corresponded with continued earthquakes long after the drilling was ended.

Last November, Roan Resources Inc. was ordered by the state to halt completion operations at an Oklahoma well after the region was struck by a 3.4-magnitude earthquake.

The latest state data available indicates that in 2017 Oklahoma experienced 304 earthquakes with a magnitude of more than 3.0, which was down by more than half (623) from 2016.