Encana Corp. still reigns as Canada’s top natural gas explorer, but it’s quickly making a name for itself as a nimble onshore oil/liquids operator after production rose 43% in the latest quarter from a year ago. 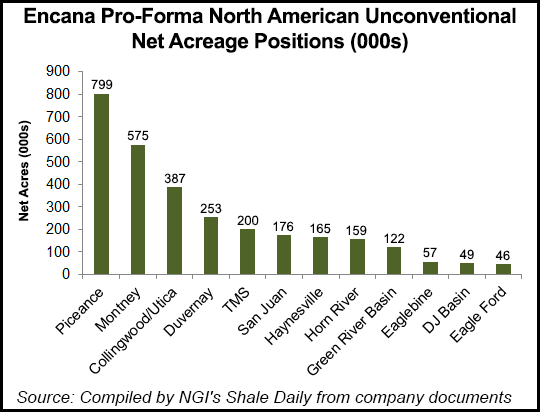 The Calgary-based independent’s fortunes had risen and fallen on gas prices over the years, but after CEO Doug Suttles came aboard last year, that strategy was tossed, along with the sell off of many prime gas-heavy properties. The strategy today is more balanced, with a concentration currently on oil and natural gas liquids (NGL).

“Clearly, we’re getting there faster than we thought,” Suttles said during a conference call. “We generally think we’re between one and two years ahead on our strategy delivery at this point.”

The surge in oil and liquids led Encana to increase its cash flow estimate for 2014 to $3.4-3.6 billion, versus an original forecast of $2.9-3.0 billion. It’s an embarrassment of riches for the long-struggling operator.

After joking that CFO Sherri Brillion was “trying to find a bigger closet to put all the money in,” Suttles said Encana has several options on the table, including debt reduction, cash to shareholders or more investments.

Encana’s five core areas — Denver-Julesburg and San Juan basins; and Montney, Duvernay and Tuscaloosa Marine Shale — were producing around 29,000 b/d at the end of 2013. The sixth core area, the Eagle Ford Shale, was added in May (see Shale Daily, May 7).

Because of what the Eagle Ford is expected to bring to the table, Encana has increased capital spending by about $300 million for this year.

“Layering in our recently acquired Eagle Ford asset, total liquids production from our six core growth areas is expected to average 92,000 b/d of oil and NGLs in the fourth quarter,” said Suttles. Encana took over the Eagle Ford properties in June. It already has added one rig (now at three), with more expected to be running before the end of the year.

The overall production numbers were solid, but asset sales slammed the bottom line.

The shortfall in the earnings numbers was transparent, nearly all related to a loss of production from asset sales. Between April and June, Encana agreed to or completed the sale of the Alberta Bighorn play for $1.8 billion; Jonah Field in Wyoming for $1.6 billion; and East Texas property for $427 million. It also sold two power plant assets. Encana also sold through a public offering the Southern Alberta assets that form PrairieSky Royalty Ltd., which raised $1.67 billion from the sale of 46% of the company (see Shale Daily, May 29).

More sales are expected, but Suttles was mum on the rumored sale of the Deep Panuke gas project offshore Nova Scotia.

Lower expenses from better production techniques and a 20% reduction in the workforce resulted in total expenses falling year/year to $1.02 billion from $1.5 billion. Cash flow in the second quarter reached $767 million, up from $554 million in the year-ago quarter.