The Alberta government and Canadian oil exporters celebrated Wednesday after Enbridge Inc. confirmed that its Line 3 pipe replacement project had been completed and would start deliveries Friday (Oct. 1). 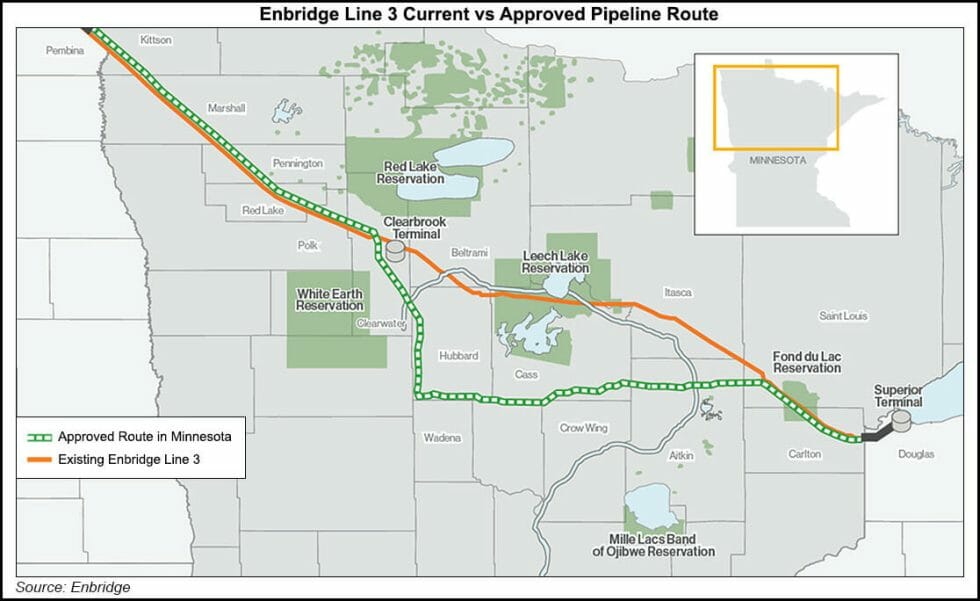 “It’s fantastic news for our province’s economic recovery,” said Premier Jason Kenney. “Our government will continue to fight for all projects that help bring our oil to market because we owe it to Albertans to get full value for our resources.”

Alberta Energy Minister Sonya Savage added, “The Enbridge Line 3 replacement line becoming operational is terrific news for the hundreds of thousands of Canadians who work in the energy sector and rely on pipeline capacity to get their product to market.”

The commencement of service follows a hotly contested $2.6 billion construction project for 340 miles across Minnesota that installed the final leg in the Line 3 replacement.

The new Line 3 is forecast to give Canadian exporters – led by the country’s top natural gas user, Alberta thermal oilsands production – an added 370,000 barrels per day of capacity. The project replaces 53-year-old pipe to enable an operating pressure increase.

A last chapter of an eight-year Minnesota regulatory and legal ordeal endured by Enbridge remains to be ended in a United States federal court. A verdict is awaited on a lawsuit by pipeline foes to overturn the Line 3 project’s approval by the U.S. Army Corps of Engineers.

A three-judge panel of the Minnesota Court of Appeals foreshadowed final victory for the Calgary-based pipeline and utility conglomerate with an August verdict that upheld a project water permit that is also at the heart of the federal case.

The appeal decision came after the Minnesota Supreme Court declined to hear a case to overturn other state approvals by the leading project opponents: the Red Lake Band of Chippewa Indians, White Earth Band of Ojibwe, Honor the Earth, and Sierra Club.

Despite the opposition, Enbridge said its project had received support from Indigenous individuals and groups.

“More than 1,500 Indigenous people worked on replacing Line 3 in the U.S. and Canada,” reported Enbridge. In addition, tribal businesses, workers and community agencies received C$750 million ($600 million) from the project.

“Specifically in Minnesota, where Native Americans made up 7% of the Line 3 workforce, over US$300 million went directly to native-owned contractors, tribal community investments and training and hiring native individuals.”

Construction followed participation by 30 tribes in a U.S. Army Corps of Engineers consultation process, and a pipeline project first: a cultural resource survey led by the Fond du Lac Band of Lake Superior Chippewa. Tribal experts and monitors walked the route, identified areas to be avoided, and had authority to stop construction.

The replacement restores Line 3 capacity to its original 760,000 b/d.