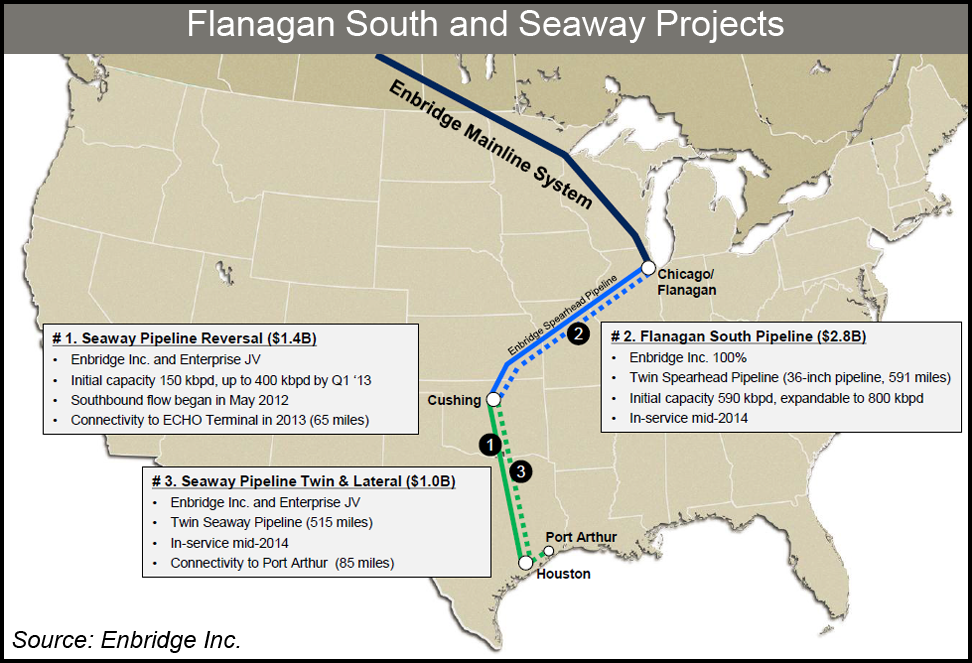 TransCanada’s multi-billion dollar Keystone XL link out of Alberta, Canada, has been stalled in the U.S. State Department presidential permitting process. At the same time, Enbridge is reportedly sailing along with its plans to parallel existing pipeline rights-of-way in a $8.8 billion, 830,000 b/d pipeline that requires no federal presidential permit.

Enbridge, which runs the most extensive Canadian-U.S. pipeline system in North America, can proceed because it has permits from years ago when it developed its initial pipeline from Chicago to the Gulf of Mexico (GOM), according to a report in the business section of the Los Angeles Times last Saturday.

“We can increase the capacity crossing the [U.S.-Canada] border by 800,000 to 1 million b/d without the need of a new presidential permit,” said Steve Wuori, president of the Enbridge liquids pipeline business unit at an annual shareholders meeting last March, as reported in the LA Times.

Along with several smaller projects, Enbridge currently is pursuing a larger pipeline paralleling its existing pipeline from Flanagan, IL, to Cushing, OK; a new line from there on a joint venture basis to the Texas Gulf Coast, paralleling the Seaway Pipeline on a joint venture with Enterprise Products Pipelines LP (see Shale Daily, Nov. 18, 2011); and increasing the capacity of an oil pipeline from northwest Indiana through Michigan.

Enbridge did not return NGI‘s Shale Daily‘s calls for an update on the project on Monday.

Ultimately, Enbridge is looking to send 310,000 b/d through Michigan and into Ontario, Canada, and 850,000 b/d to the GOM refineries. The motivation for Enbridge, which earned in excess of $1 billion last year, is “surging energy demand” in different parts of North America, a company spokesperson told the Times.

TransCanada and Enbridge executives have maintained there is enough oil in Cushing for both pipeline projects to the GOM to compete, but with respect to getting a path for Canadian crude from Canada to the Gulf Coast there is still a pretty significant dead spot between where they get their crude and the Gulf Coast, thus, TransCanada eventually needs Keystone XL’s northern portion.

Last year officials at the two companies indicated that down the road the Enterprise/Enbridge Seaway project also could be expanded to 400,000 b/d in the first half of 2013. The partnership also plans to build an 85-mile extension to Seaway from the Houston area to heavy oil refineries in Port Arthur, TX.

While Enbridge is keeping a lower profile relative to Keystone XL, the Times report mentioned safety concerns among federal regulators and communities along the pipeline routes, and it noted recent incidents involving Enbridge pipelines that have drawn fines from the U.S. Department of Transportation’s Pipeline Hazardous Materials and Safety Administration (PHMSA).

PHMSA dished out a $3.7 million fine to Enbridge for its 2010 spill at Marshall, MI, which dumped more than 20,000 bbl of oil into the Kalamazoo River. PHMSA and the National Transportation Safety Board’s investigation pointed to various company and regulatory failures in what it dubbed the most expensive onshore oil spill in U.S. history.