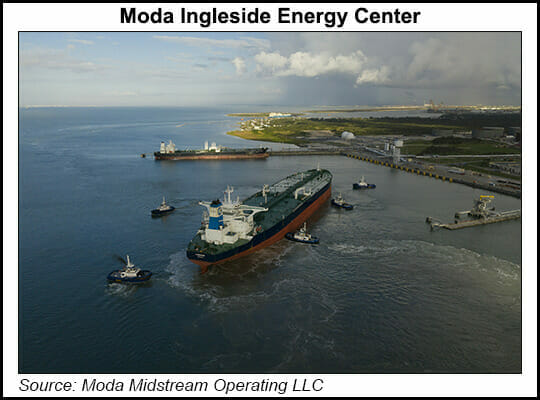 Under an agreement with EnCap Flatrock Midstream, Enbridge on Tuesday said it would acquire full operating interest in the Ingleside Energy Center near Corpus Christi, TX. The facility, built in 2018, is capable of loading very large crude carrier vessels and comprises 15.6 million barrels of storage and 1.5 million b/d of export capacity. It loaded 25% of all U.S. Gulf Coast exports in 2020, according to Enbridge.

“Over the last several years, we’ve been building a strong position in the U.S. Gulf Coast through both natural gas and crude infrastructure,” said Enbridge CEO Al Monaco. “Our strategy is driven by the important role that low cost, sustainable North America energy supply will play in meeting growing global demand.”

Enbridge had sought to build its own crude export terminal offshore the Upper Texas coast. The Texas Colt project was being developed with Oiltanking GmbH and Kinder Morgan Inc. Weak demand, however, prompted the company to scuttle the plans in January 2020.

Enbridge also had partnered with Enterprise Products Partners LP on the Sea Port Oil Terminal (SPOT). However, that project has failed to gather much momentum and remains off Enterprise’s backlog.

Monaco touted Ingleside terminal’s close proximity to Permian Basin reserves, along with the cost-effective and efficient export infrastructure in place. The terminal is underpinned by 925,000 b/d of long-term take-or-pay vessel loading contracts and 15.3 million barrels of long-term storage contracts, “providing visibility to future cash flows,” according to Enbridge.

“Its direct connection to globally competitive Permian and Eagle Ford basins will assure the sustainability of cash flows for many years to come,” management said.

Moda CEO Bo McCall called the Ingleside terminal a “flagship asset.” The site of the facility was originally designed by the U.S. Navy to support a carrier battle group, he said, and despite the uncertainty following its closure, “has developed into the nation’s largest exporter of crude oil, creating jobs and economic prosperity for the Coastal Bend.”

Enbridge, with a company goal to achieve net zero emissions by 2050, plans to develop up to 60 MW of solar power capacity on more than 500 acres of available land at the site. The project’s buildout is expected to exceed the terminal’s power requirements, allowing excess generation capacity to be contracted to local industrial and refining facilities. Longer term, Enbridge could develop additional low carbon energy infrastructure within the facility, including renewable fuels and carbon capture terminaling.

The U.S. Gulf Coast (USCG) assets are expected to be “immediately and strongly” accretive to Enbridge’s distributable cash flow per share and earnings per share. The transaction is to be initially funded with existing liquidity and provides Enbridge with “further organic growth potential supporting the company’s post-2023 growth outlook.”

Meanwhile, expansions have been permitted of existing storage capacity to 21 million barrels and export capacity to 1.9 million b/d, providing Enbridge the “opportunity to capitalize on increasing volumes and visibility to near-term low capital intensity growth.”

The transaction is subject to customary regulatory approvals and closing conditions and is expected to close by the end of the year.

Moda and EnCap are to retain ownership in Vopak Moda Houston, a deepwater storage and terminaling facility at the Port of Houston. Vopak, according to Moda, is the number one port in the United States in terms of total waterborne tonnage and home to the nation’s largest and world’s second-largest petrochemical complex.

Vopak, the first greenfield terminal development in the port in more than a decade, recently commissioned its deepwater dock and has constructed storage and terminaling infrastructure for its industrial gas product line. Dutch independent multinational firm Royal Vopak NV and Moda Midstream are partners in the project.

McCall is to become Chairman of Moda Midstream, with current CFO Jonathan Ackerman being tapped as CEO. Ian Levine, Moda’s current vice president of Corporate Strategy and Treasurer, is to become Vice President, Strategy and CFO.