Canadian pipeline giant Enbridge Inc. said Friday it was seeing an uptick in interest for crude and liquefied natural gas (LNG) exports from the U.S. Gulf Coast amid an anticipated global economic recovery from the Covid-19 pandemic. 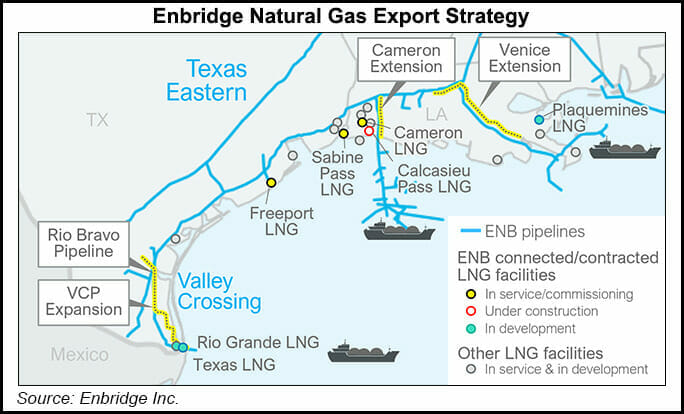 On the oil side, the company has partnered with Enterprise Products Partners LP to build a deepwater crude oil export terminal off the Texas coast.

Enbridge also shared the latest developments on its closely watched Line 5 project. Designs are complete and a construction contractor is being recruited for the disputed plan to save the 540,000 b/d Line 5 with a new $500 million tunnel under the Straits of Mackinac, Monaco said.

“This is clearly the best way to replace and modernize the existing pipelines while maintaining absolutely essential supply of crude oil and propane that Michigan, Ohio, Indiana, Ontario, Quebec and the surrounding region rely on,” Monaco said Friday in the company’s 1Q2021 earnings report.

He made the statement as Enbridge, a Calgary-based pipeline and power conglomerate, prepared for the next episode in a 28-month-old conflict with the executive branch of the Michigan state government.

While the fate of the Michigan tunnel project remains unsettled, Enbridge predicted two other big expansions currently under construction on its pipeline network would be completed on schedule by the end 2021.

Work is more than half-finished and on schedule on a US$2.6-billion Minnesota leg in a Line 3 pipe replacement project that is expected to increase Canadian oil export capacity by 370,000b/d, reported Enbridge.

Also on schedule, the C$1.5 billion ($1.2 billion) in additions to the firm’s Westcoast gas system in British Columbia are forecast to add capacity of 590 MMcf/d for exports to the northwestern U.S. as well as Canadian market service.

The results reversed 2020 first-quarter losses of C$1.4 billion ($1.1 billion) or 71 Canadian cents/share (57 cents/share), due to once-only accounting impairments of an investment in another firm and foreign exchange financial hedges.