Natural gas traffic grew at a brisk pace on Enbridge Inc.’s Westcoast Transmission system in the six years before a spectacular rupture, explosion and fire earlier this month disrupted flows on the British Columbia (BC) pipeline. 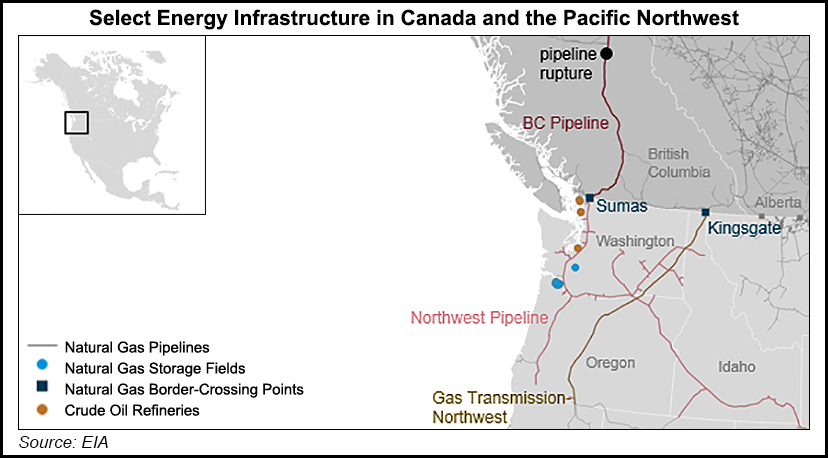 The number of days when BC deliveries topped 1.6 Bcf jumped from zero in 2012 to 30 in 2013, then quadrupled to 130 last year, according to new disclosures made by Enbridge subsidiary Westcoast Energy to the National Energy Board.

Wear and tear also increased. The annual number of incidents that required unplanned repairs on the BC pipeline rose last year by 60% to 2,400, compared to 1,500 in 2012, Westcoast said.

“Beginning in 2013/2014, there was a fundamental shift in demand [for deliveries],” according to the new disclosures. “Winter season demand is now consistently at levels formerly only seen during weather-related peaks.”

BC gas pipeline traffic has stayed high. The Oct. 9 mishap halted exports to the United States of 1.1 Bcf/d, say records kept by the Energy Information Administration.

“This increased year-round demand has resulted in far less opportunity to undertake necessary maintenance or manage unplanned outages without significantly impacting the system’s ability to meet shipper demand, and has resulted in much higher use of existing compression units,” Westcoast said.

The new disclosures report the pipeline machinery works hard. Since 2008, the number of operating hours required from various generations of BC compressors has climbed by 60-260%

Investigations are underway into the cause of the Oct. 9 rupture, which is not yet repaired and continues to curtail deliveries of northern gas to southern BC and the northwestern U.S. The new NEB disclosures do not speculate about the mishap and only repeat that “Westcoast is working hard to repair the impacted 36-inch pipeline and is committed to bringing the system back to full capacity in a safe manner.”

Westcoast provided the disclosures to encourage NEB approval of four applications for pipeline capacity expansion and reliability upgrades that were made before the mishap early this month.

“The reliability projects are anything but cosmetic and unnecessary,” Westcoast said. “The existing [compressor] units associated with all the projects are no longer reliable, and when they fail the reliability of the entire system is jeopardized.”