Growing natural gas production from the Montney and Duvernay shales has Enbridge Inc. planning an expansion of its British Columbia Pipeline T-South system to deliver 190 MMcf/d into the Huntingdon/Sumas market at the Canadian-U.S. border. 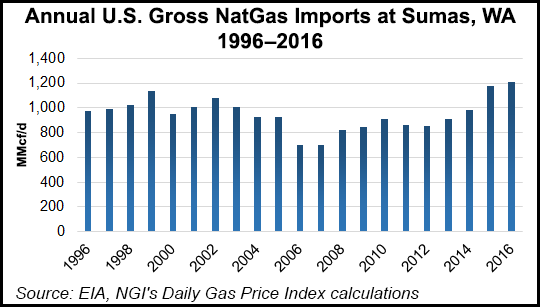 During an earnings conference call, CEO Al Monaco said the expansion would entail the addition of compression and looping pipeline at a cost of about $1 billion. A binding open season is under way.

“The system is currently fully contracted and an expansion is necessary to meet increasing customer demand as a result of rapidly growing production in the prolific Montney and Duvernay regions,” the company said. “Subject to the outcome of the open season, the project could be brought into service by late 2020.

“..[W]e are expecting strong demand for the expansion of our T-South gas pipeline given the attractive fundamentals supporting natural gas production growth from the Montney and the Duvernay.”

Enbridge earned $638 million (54 cents/share) in the first quarter compared with $1.21 billion ($1.38/share) in the year-ago quarter. The decrease was mainly due to non-recurring items, as well as the issuance of shares, some in conjunction with the company’s merger with Spectra Energy.

“…Spectra Energy Partners’ strong base business continues to perform well, and is being further enhanced by the expansion projects we placed into service in 2016 and those that we are advancing,” said SEP President Bill Yardley.

SEP has $4.4 billion in capital expansion projects in execution. Construction on Sabal Trail continues to advance on schedule, with in-service expected by the end of June, the company said. The Access South, Adair Southwest and Lebanon Extension projects, and the second phase of the Gulf Markets Expansion project are under construction, keeping the projects on target for in-service in the second half of this year.

Construction on Atlantic Bridge began this month, with initial in-service of the Connecticut facilities scheduled for the fourth quarter. Full in-service is expected in the second half of 2018, the company said.

The Nexus Gas Transmission project and related Texas Eastern Appalachian Lease project are expected to receive their certificates shortly after FERC again has a quorum, SEP said. The Bayway Lateral project is on schedule for its first half of 2018 in-service date and the South Texas Expansion project continues to target in-service in the second half of 2018. The PennEast project continues to advance as well, SEP said. The Federal Energy Regulatory Commission issued its final environmental impact statement in April, and the project is targeting a late 2018 in-service date.

The Stratton Ridge storage expansion remains on schedule for in-service in the first half of 2019.