Canadian midstream giant Enbridge Inc. is investing up to $100 million in the U.S. renewable natural gas (RNG) sector as part of its strategy to lower its carbon footprint. 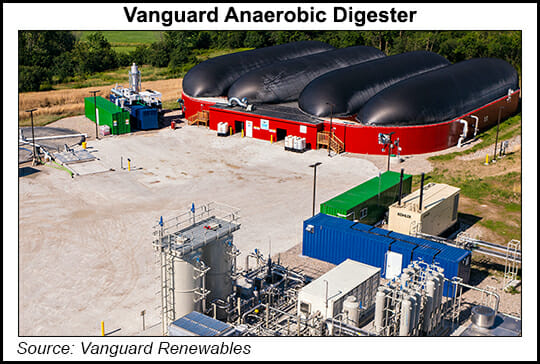 The company is partnering with Vanguard Renewables, a developer of farm-based anaerobic digestion facilities that convert food waste and dairy manure into RNG. The agreement announced Tuesday calls for the development of eight facilities across the United States.

Enbridge’s investment would fund upgrading equipment to convert the farm-derived product into pipeline-quality RNG. It would also cover transportation and marketing services for the gas. Vanguard, meanwhile, would invest $200 million to build and operate the facilities in the Northeast, Southeast, and Midwest.

“As we think about energy transition and our core competencies, keeping our pipes used and useful is incredibly important to us,” Enbridge’s Caitlin Tessin, director of Market Innovation, told NGI. “And renewable natural gas is a very near-term opportunity to do that.”

The company is no stranger to RNG projects. Its Canadian utility, Enbridge Gas Inc., already has three projects online with more to come, Tessin said.

However, the Vanguard deal offered a unique approach to sourcing feedstock and customers, she added. Vanguard in 2020 launched its Farm Powered Strategic Alliance, signing up large food manufacturers such as Starbucks and Unilever to supply food waste to the company’s operated digesters. Enbridge plans to market the production back to the facilities’ suppliers “as well as to other large corporations” with strong environmental, social and governance (ESG) goals, Tessin said.

“We really see this kind of virtuous circle model as something unique in the RNG business and something that we were very interested in partnering with them in.”

The facilities would be hosted by farmers, who then would receive cost savings and a new income stream while Vanguard operates the facilities.

Both Enbridge and Vanguard see the potential to grow their partnership beyond the first eight sites. Vanguard has contracted with more than 100 farmers, CEO John Hanselman told NGI.

“These eight projects are kind of the first stage, and we’d like to see the program expand significantly beyond that,” Hanselman said. “And certainly, we’ve got lots and lots of farms that have joined with us and are committed to recycling their manure and are bringing food waste to the farms to create a much more potent mix.”

He described the deal with Enbridge as an “accelerant” for Vanguard’s growth strategy.

“Now we can talk to virtually any customer across the U.S. about including renewable natural gas as part of their decarbonization goals,” he said. “And with Enbridge kind of at our side, we know that we’ll be able to get the gas to them to any one of their facilities for decarbonization.”

For its part, Enbridge is looking at additional RNG opportunities to supply its system.

“Whether it be landfill gas, or dairy-specific projects, we’re having a number of conversations on those types of RNG projects,” Tessin said. “But really we’re committed on the food and farmway side to this Vanguard partnership and seeing how we can make it grow.”

Customers find RNG attractive because it is a proven technology that can be used now, as opposed to longer-term energy transition investments such as hydrogen, Tessin and Hanselman said.

“It really is a drop-in replacement fuel, and it is an incredibly practical and available solution today,” Hanselman said.

While RNG has seen some recent growth on the transportation side as part of the renewable fuel standard market, Tessin expects it to grow further with support in the utility space.

“I think that over the next handful of years, we’re going to see a lot more companies that have these strong ESG goals, that are committed to 100% renewable energy and renewable power,” she said. “Not just on the electricity side, but offsetting those thermal loads where they can’t, for instance, electrify boilers. They’re going to need a low-carbon solution for their current natural gas load. So I see that I see the market growing a lot.”