Minnesota regulators have determined that Enbridge Inc. must pay $3.2 million in penalties and repairs after construction of the contentious Line 3 oil pipeline replacement project was found to have caused an underground aquifer to leak. 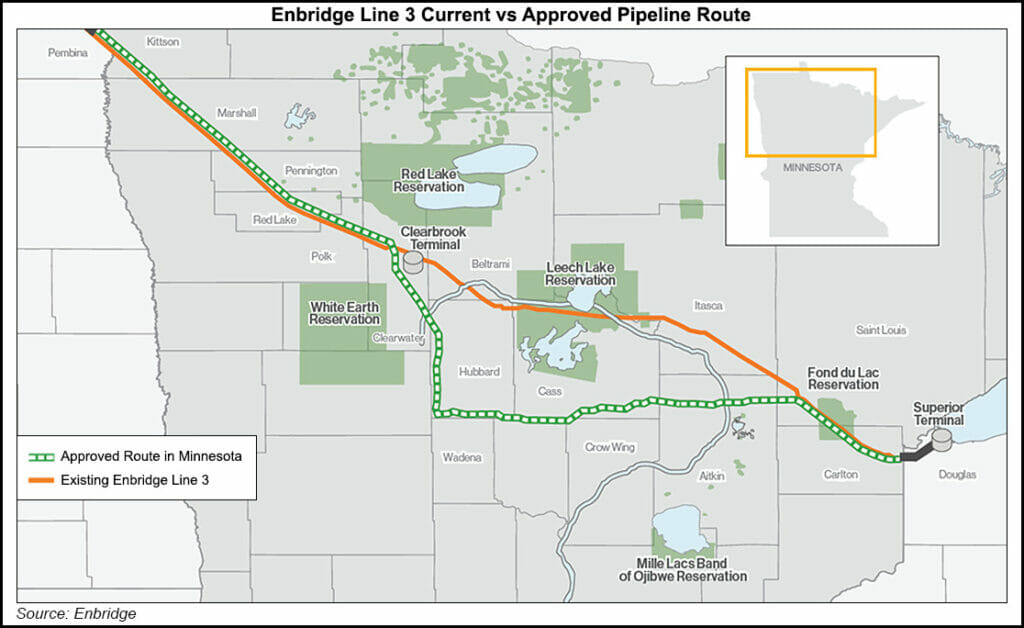 The Minnesota Department of Natural Resources (MDNR) announced that the mistake has cost a $20,000 administrative penalty, $300,000 for water losses, $250,000 for environmental monitoring, and a $2.75-million fund for future restoration costs.

Calgary-based Enbridge pledged to cooperate with the state regulator on damage control and prevention.

The Minnesota regulators said inspections found a 24.2 million-gallon leak from an underground aquifer that was penetrated by a ditch 18 feet deep and pilings driven down to a depth of 28 feet at the Line 3 Clearbrook Terminal. The Enbridge construction permit set a digging depth limit of eight to 10 feet deep at the site.

MDNR commissioner Sarah Strommen said the department “is taking seriously our responsibility to protect and manage natural resources…Enbridge’s actions are clear violations of state law and also of public trust. This never should have happened, and we are holding the company fully accountable.”

The permit violation has been referred to Clearwater County authorities whose territory includes the pipeline terminal site. Authorities may consider a criminal prosecution for the water leak, plus future misdemeanor charges if Enbridge disobeys a MDNR site restoration order.

The $2.6 billion construction project would traverse 340 miles across Minnesota as the final leg in the Enbridge pipe replacement. Canadian, North Dakota and Wisconsin stretches of the 1,031-mile, $9 billion pipe replacement — the biggest single investment in Enbridge’s 70-year history — have been completed.

Enbridge has told Canadian regulators that the new Line 3 would be capable of flowing oil by mid-September. However, legal hurdles remain as environmental groups continue to challenge the pipeline.