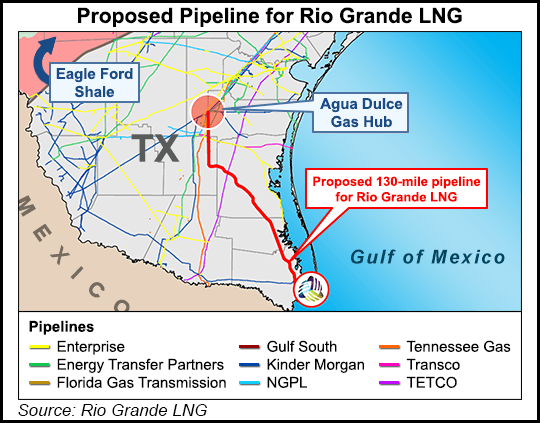 The companies said late Thursday that Enbridge would pay no more than $25 million to acquire Rio Bravo, with $15 million due when the deal closes, which is expected by the end of 1Q2020, and the rest payable when NextDecade reaches a positive final investment decision (FID) on Rio Grande.

“This agreement with Enbridge further enhances our commitment to our global LNG customers, natural gas suppliers and other stakeholders to deliver our Rio Grande LNG project on time and on budget,” said NextDecade CEO Matt Schatzman.

The company is expected to make an FID on the export terminal this year. If sanctioned, the project is targeting an in-service date of 2023. The facility would be located on a 984-acre site in the Port of Brownsville, TX, and have a total export capacity of 27 million metric tons per year (mmty), or roughly 1.3 Tcf annually.

The announcement with Enbridge came days after the U.S. Department of Energy authorized Rio Grande to export LNG to non-free trade agreement countries.

The 137-mile Rio Bravo system would consist of twin 42-inch diameter pipelines and run from the Agua Dulce supply hub to the liquefaction facility. The companies have also negotiated a precedent agreement that preserves NextDecade’s firm transportation capacity on the system for a 20-year supply term.

Both Rio Grande and Annova are part of a second wave of LNG projects being developed on the Gulf Coast. NextDecade announced its first long-term supply deal for Rio Grande last year with a subsidiary of Royal Dutch Shell plc that will take 2 mmty for 20 years.